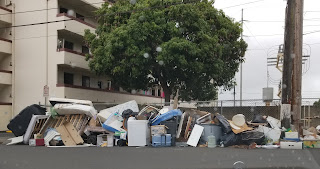 
"The program is clearly not working as evidenced by the piles of mattresses, rusting appliances, infested sofas and other trash growing daily on street corners, at public parks and even at our schools," said Representative Takashi Ohno. "This is not only an eyesore but a health and safety problem that is turning Honolulu into a dirty city on a beautiful island."
Ohno (Nu‘uanu, Liliha, Pu‘unui, Alewa Heights) said the City's system of requiring residents to make appointments for limited bulky items pickups does not solve the more serious problem of "hot spots" where trash regularly is piled in places with no one to hold accountable for the illegal dumping.
"Basic government responsibilities include keeping our communities clean and sidewalks clear for residents," Ohno said. "Right now, the government is failing in that regard."
While trash pickup is a City responsibility, Ohno plans to re-introduce House Bill 2481 (2018) during the next legislative session to help prosecute violators by allowing witness to provide statements, photographs and video recordings to be used by law enforcement for illegal dumping investigations.

"In my work with residents, I've found that investigations of illegal dumping after-the-fact rarely lead to citations or arrests," Ohno said. "Citizens in the community are best equipped to monitor known 'hot spots' where dumping occurs in early-morning and late-night hours. This bill provides another tool to help catch the criminals who continuously disregard bulky item protocols."
Ohno also plans to discuss potential ways State legislators and City officials can collaborate on other legislation to increase enforcement or funding initiatives to address illegal dumping prior to the legislative session.
"First, we need strategies to eliminate the 'hot spots' that regularly attract piles of trash. Until we solve how to deter the illegal dumping at the 'hot spot' locations we will not see any improvements," he said.
"Second, we need to catch the lawbreakers who take advantage of the bulky item program by dumping their belongings improperly. The inspectors, law enforcement, and City prosecutors need to catch and punish the violators.
"If State departments are required to help the City and County keep Honolulu clean, I believe that is cause worthy of state resources."
Posted by James Gonser at 9:16 AM