The Hawaii House of Representatives has passed HB3 HD1, of the 2013 Second Special Session, which will provide $7.3 million in emergency funding to sustain the operations of the Kauai regional health care system. Without this funding Kauai’s two hospitals operated by the Hawaii Health Systems Corporation (HHSC) would have run out of money in January 2014 forcing them to close down—placing the health care of Kauai's residents and visitors in jeopardy.

HHSC is a public benefit corporation of government of the State of Hawaii providing patient-centered, integrated-care systems throughout the islands and is the fourth largest public health system in the country. On Kauai, the organization operates two critical access hospitals, the only inpatient psychiatric unit on the island, long-term care, and three physician clinics. The two operating hospitals are West Kauai Medical Center and Samuel Mahelona Memorial Hospital.

The bill, submitted by the Governor’s office, initially requested an appropriation of $2.5 million. After consideration of testimony from HHSC and the community, the House Finance and Health Committees raised the funding to $7.3 million to cover operations until March 2014.

Finance Chair Sylvia Luke (Makiki, Punchbowl, Nuuanu, Dowsett Highlands, Pacific Heights, Pauoa) and Health Chair Della Au Belatti (Makiki, Tantalus, Papakolea, McCully, Pawaa, Manoa) thanked the Representatives from Kauai, “for their diligence in bringing this matter to our attention and for educating all of us on the importance of passing this bill. We are glad that we had the opportunity to recapitalize the system before the public was put at risk,” they said.

In applauding the passing of the bill, the Kauai delegation stated, “We are extremely appreciative to the members of the Health and Finance Committees for understanding the critical need of this emergency request and for increasing the amount to a level that would sustain our public health system on Kauai. It is no secret that the neighbor islands and rural districts require additional assistance to provide even the basic level of healthcare and we will continue to work towards improving the health care delivery system for the people of Kauai.”

The bill now moves to State Senate for their consideration. Senate Vice President Ronald D. Kouchi (Kauai, Niihau), a member of the Senate Ways and Means Committee, pledged his support for the bill and its passage stating, “the emergency appropriation for Kauai’s two HHSC hospitals, in Waimea and Kapaa, is necessary to ensure that all residents of Kauai are afforded access to health care services.” 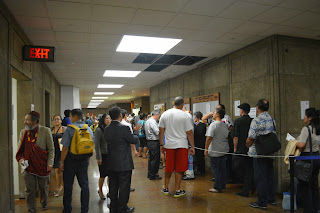 Honolulu, Hawaii – To accommodate the expected high numbers of people wishing to testify on SB1 and to allow testifiers to plan their time accordingly, the House Judiciary and Finance Committees plan to begin the public hearing at 10am and end at midnight. At that time if there are people who signed up to testify still waiting to speak, the hearing will be continued on Friday, November 1 at a time to be determined.

Due to the anticipated high volume of testifiers for the October 31, 2013 House hearing on SB1 relating to equal rights, the Judiciary and Finance Committees will assign registration numbers to people who submit testimony and wish to testify in-person. Those who submit testimony online and wish to testify at the hearing will receive an email prior to the hearing with their registration number. Those who submit their testimony in person should go to the House Chief Clerk’s Office (Room 027) where they will be assigned a number at that time.

Online testimony can be submitted at http://www.capitol.hawaii.gov/submittestimony.aspx.

The numbering system is being implemented to more efficiently assist the flow of people and their testimony during the hearing. It will also allow testifiers to know where they are on the testimony list and plan their presence accordingly.

The committees are waiving the 24 hour deadline for submission of testimony which will be accepted before and during the October 31 hearing.

For additional assistance on the day of the hearing, an information booth will be available outside of the capitol auditorium.

The hearing notice is available at: http://www.capitol.hawaii.gov/splsession2013b/Hearing_JUD-FIN_10-31-13_.pdf

Posted by Unknown at 6:05 PM No comments:

Today the House honored the Coaching Boys Into Men (CBIM) program, created by Futures Without Violence and implemented in Hawaii by the non-profit Ala Kuola. The program equips athletic coaches with strategies, scenarios and resources needed to build attitudes and behaviors among young male athletes that promote respectful, healthy relationships. Coaches have numerous opportunities to teach early and often that violence has no place in relationships.

The event was organized by Edwin K. Flores, Ala Kuola and Vice Speaker John Mizuno. The following athletic directors and coaches were in attendance: