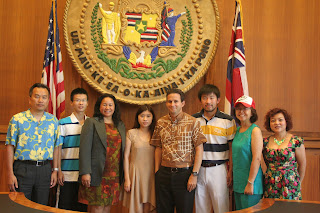 Rep. Karen Awana, Chair of the International Affairs Committee, accompanied a group of visiting college students from China to the Office of Lt. Governor Brian Schatz today.  The students were interested in LG Schatz's political career and how he got to rise to such an important position at a young age. 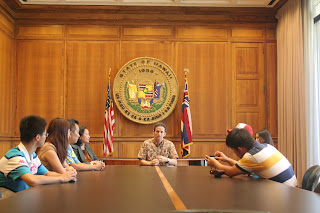 The LG explained how he served in the House of Representatives like Rep.Awana, and that he left the House to run for higher office in 2006.  Candidly, he shared the difficulties of convincing voters of his competence and experience because of his age.  He was able to gain their confidence in part by demonstrating that he, like them, was a father and was responsible for a young family.  And he, like them, had retired parents who faced the challenges and issues related to aging.

The students were also accompanied by Dr. Shu He (far right in the first photo above), Associate Professor in the School of Journalism and Communications at the Peking University in Beijing.  Dr. Shu He is a visiting scholar at the University of Hawaii this year, from July 2012 to July 2013.

Posted by James Gonser at 2:34 PM No comments:

House Communications Assistant (during the legislative session), Jay Parasco, has been eating/working his way through foreign lands during the interim.  You can keep up with his escapades on his personal blog, Open Mind, Empty Stomach, where photos of gorgeous food and spectacular locations abound.  As we learned during the session, Jay is both a talented writer and obsessed foodie, and his food writing is a great escape from the daily grind of downtown Honolulu fare. 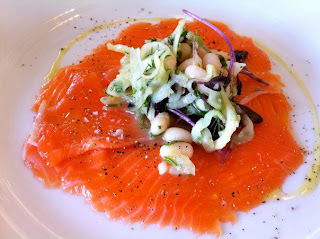 He started the world tour in Australia and is currently in New Zealand, where salmon is apparently abundant.  Wow - look at this salmon salad above that was prepared in Wellington, NZ.  I'm told the last stop before heading home to Hawaii is to meet his friend "Jesus" (not kidding) on Christmas Day in India.
Posted by James Gonser at 10:47 AM No comments:

Next on Kukui Connection: Deborah Gardner on Nursing

On the next episode of Kukui Connection, Rep. Marilyn Lee interviews Deborah Gardner, the new executive director of the Hawaii State Center for Nursing.  The show airs on Friday, August 3 at 8:00 p.m. on Olelo, channel 54, and repeats on Sundays, 8/5 and 8/12 at 4:00 p.m.. 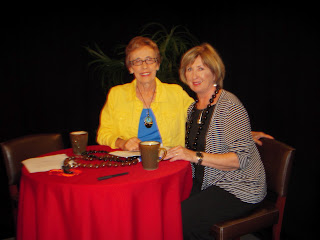 Gardner has been a nurse for nearly 40 years, beginning her career in the U.S. Navy.  She got her masters degree in nursing at the University of Hawaii in the late 1970's.  She realized what a unique education she received in Hawaii, particularly as it relates to cultural sensitivity, only after she moved back to the mainland. She has worked at the National Institute of Health, focusing on brain development and mental health issues, and worked under Mary Wakefield at the Center for Health Policy, Research and Ethics at George Mason University.  Wakefield was later appointed by President Obama as the administrator for the Health Resources and Services Administration (HRSA).

Gardner came back to the state level, and to Hawaii specifically, because she saw that Hawaii has been one of the progressive states in health issues and in implementing the Affordable Care Act.  She believes that there is a lot of misinformation about the ACA being spread, and that if people had more accurate information, it's hard to imagine that they would oppose it.  For example:

People who have pre-existing conditions will be able to get health insurance coverage.

Parents are able to cover older children who have a gap in coverage, such as students in college, or people between jobs.

While not perfect, the ACA begins to look at how we approach covering everyone and still maintain effective cost controls.  While Hawaii covers about 90% of its people, thanks to the Prepaid Healthcare law passed in the 1970's, access to healthcare is still a concern, especially in rural areas.  Gardner said that she's starting to learn what we have in our system, and it's impressive.  The mobile van on the Big Island, championed by Rep. Bob Herkes, is a good example of getting healthcare out to remote areas.

Gardner sees the Center for Nursing as a place where the focus is on improving healthcare for patients.  The center looks at workforce data, nursing as a profession issues, and nursing education.  For more information, visit their website: http://www.hinursing.org/

Many children are at a disadvantage in learning because they lack even the most basic tools - pencils, paper, rulers, etc.  The children are responsible for bringing their own supplies, and some families just can't afford them.  Parents are still struggling during the economic recovery, and some may still be looking for work.  Public schools do not subsidize this expense.  If you can help, please consider donating these supplies and more.

WHERE:         Waipahu Town Center, fronting CVS/Longs Drugs
Posted by James Gonser at 10:17 AM No comments: 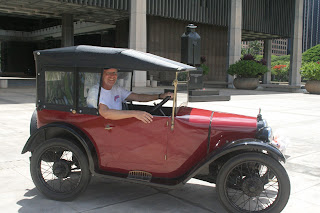 Meet Fred Weisberger, President of the Antique Automobile Club of America, Aloha Region.  Fred is driving his own 1928 Austin Seven which was part of today's event in which the Governor proclaimed July 13 as Collector Car Appreciation Day.

This past session, Rep. Awana introduced House Resolution 44.  The resolution recognizes the collector car and restoration industry as part of the country's automotive heritage.

"Hawaii is a special place where thousands participate in automobile restoration," said Rep. Awana.  "This past time helps our local economy, creates jobs and provides a wholesome environment for families to participate.  I am grateful that our Governor has proclaimed this special day as part of a national initiative."