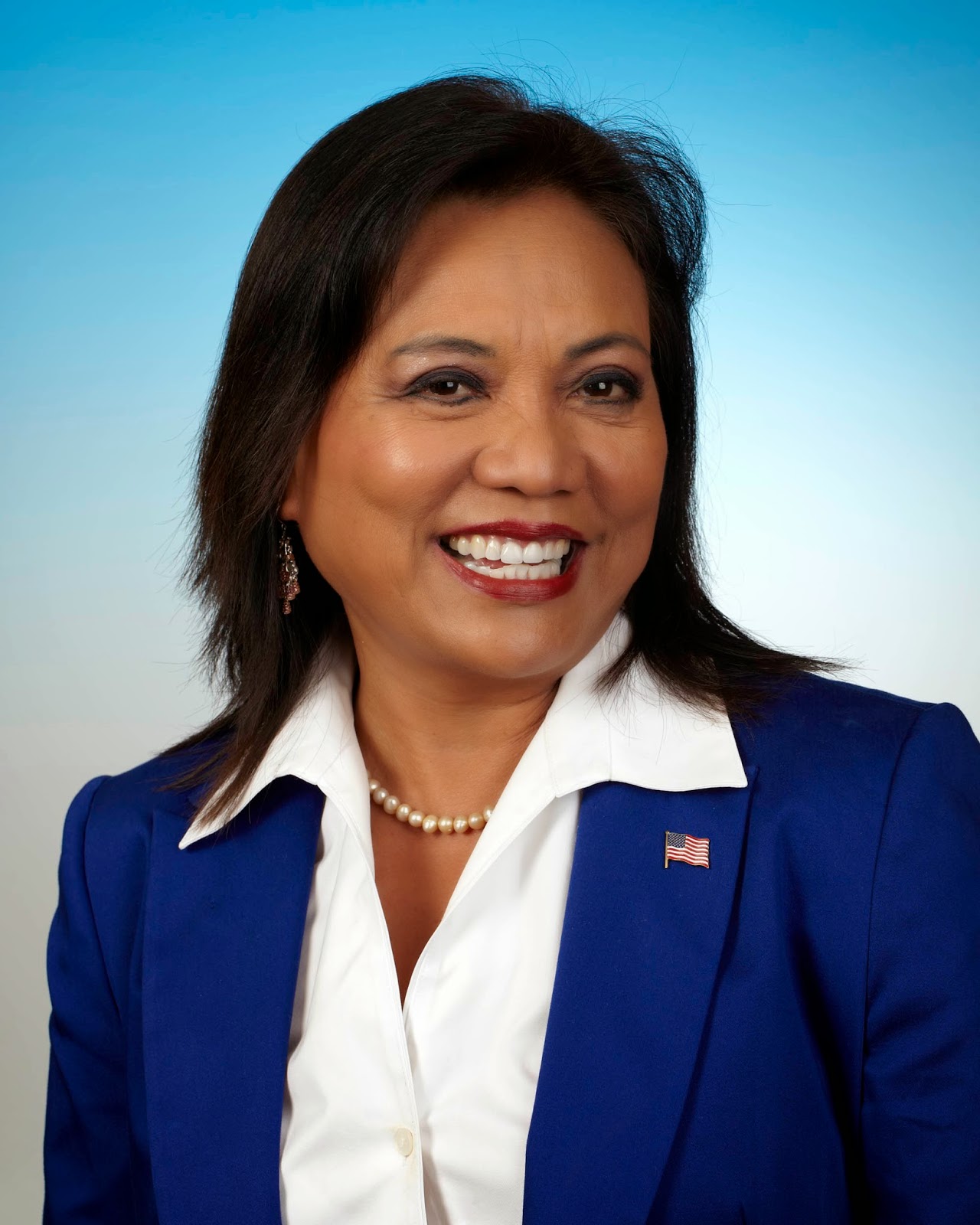 Representative Rida Cabanilla (Ewa Villages, Ewa Beach, Ewa Gentry, Ocean Pointe) has been selected by the Filipina Women’s Network (FWN) as one of the 100 Most Influential Filipina Women in the World. Honorees are invited to attend the Filipina Leadership Summit and awards gala on October 5-8, 2014 in Makiti, Philippines.

The 100 Most Influential Filipina Women in the World Award™ recognizes Filipina women who are influencing the face of leadership in the global workplace, having reached status for outstanding work in their respective fields and are recognized for their leadership, achievement and contributions to society, mentorship and legacy. Annual and past awardees are asked to mentor a young Filipina protégé through the FEMtorship program to develop the next generation of Filipina global leaders.

“I am truly proud to be honored by an organization so relentlessly dedicated to the development and promotion of women across the world,” said Cabanilla. “I intend to contribute my own talents and experience in building the future of our community and I look forward to the exciting opportunity to mentor a young woman so that she too may one day be a benefit to society.”

“The Global FWN100™ women are dynamic entrepreneurs, practitioners, community leaders and executives who have moved through the ranks in large organizations, nonprofits, and government agencies. They are powerful examples of women doing extraordinary work who will motivate our youth and future leaders,” said Thelma Boac, Chair of the Global FWN100™ Worldwide Search and Selection Committee. “They were selected based on the size and scope of their positions, influence in their industries and their communities, board affiliations and other leadership roles. Nominations were received from 16 countries.

FWN is a nonprofit professional association based in San Francisco, California with members worldwide founded to increase awareness of the activities, careers and status of women of Philippine ancestry. FWN’s mission is to advance Filipina women in the global workplace through programs and activities that enhance public perceptions of Filipina women's capacities to lead and to build the Filipina community's pipeline of qualified leaders, to increase the odds that some Filipina women will rise to the president position in the private and public sectors worldwide.

Posted by Unknown at 3:08 PM No comments: 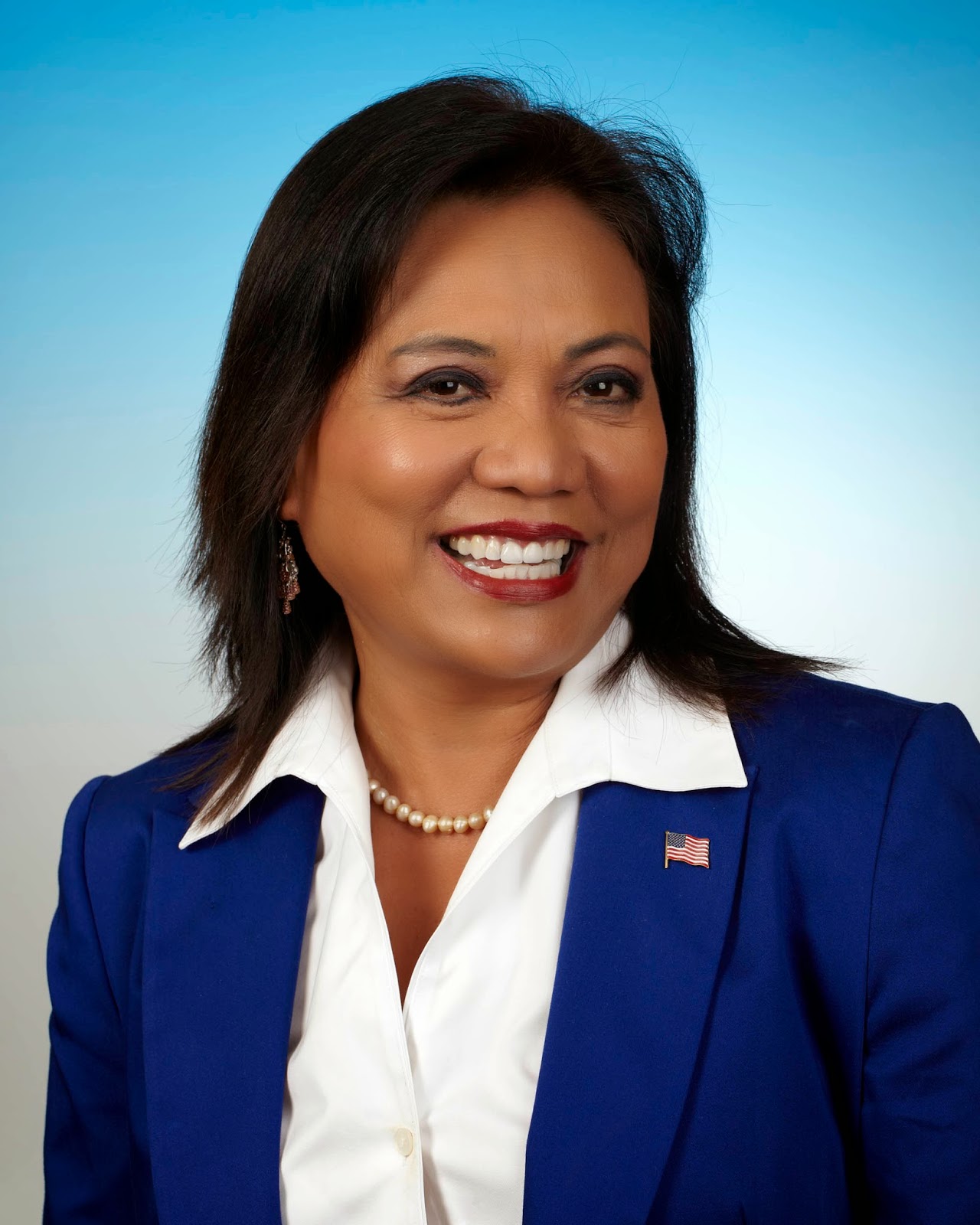 SB515 (2013), signed into law as Act 222 (SLH 2013) by Governor Abercrombie in June 2013, created and appropriated $100,000 for a three-year ‘Return to Home’ pilot program, an initiative to provide one-way airfare tickets for eligible homeless individuals to return home to their families on the mainland. However, the Department of Human Services—the coordinating department as written in law—declined to establish and administer the program.

The intent of the program would reduce the ever growing problem of homelessness in Hawaii and ensure that individuals who find themselves homeless in the islands are able to reconnect with family and support networks where they would have the opportunity to recover. Additionally, the program would possibly further save Hawaii taxpayers millions of dollars in welfare costs that would have been spent on homeless individuals who have travelled to live in the state.

“The Governor has not released the $100,000 that was appropriated in the 2013 state budget for the ‘Return to Home’ program for the homeless. This appropriation is much needed to decrease the homeless population in our state, to return these stranded homeless individuals from the mainland to an environment of their choosing, and most importantly to preserve these funds for our own homeless kamaaina. Let us implore the Governor to release the money and create the program,” said Cabanilla.
Posted by Unknown at 10:29 AM No comments: 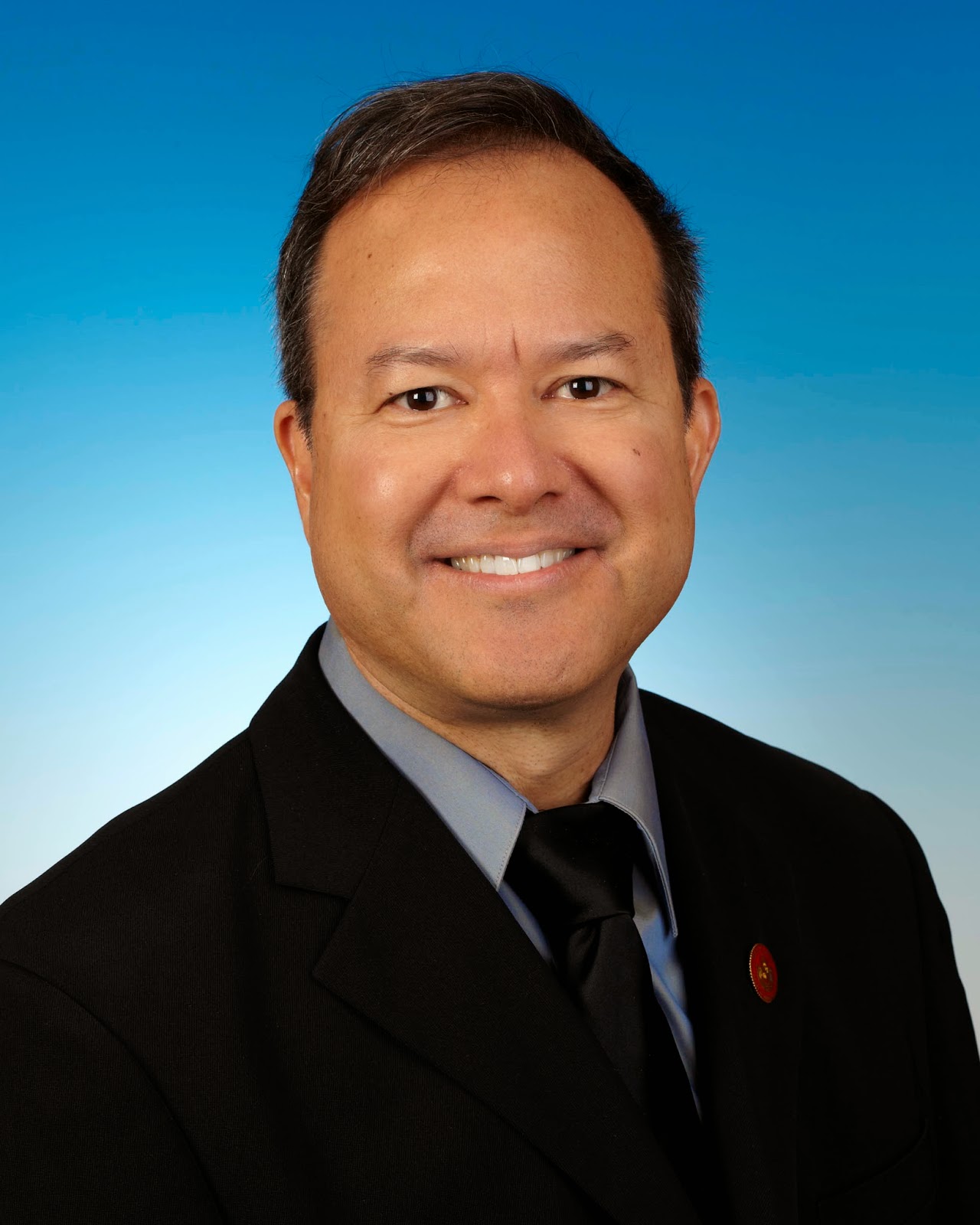 Representative Tom Brower (Waikiki, Ala Moana) announced plans to introduce legislation banning aerial advertisement in the state of Hawaii. The proposed legislation will seek to clarify the ambiguities and jurisdiction of aerial advertising written in federal, state, and city law. The measure will specifically make it illegal for a pilot to fly a plane out of a state airport for the purpose of towing a banner for advertisement.

“I have had discussions with U.S. Federal Aviation Administration (FAA) and state officials to identify what we can do. Due to the ambiguities of city, state and federal law, there is a need for legislation to add more clarity. Right now, we have federal and state laws that need further explanation,” said Brower. “Our skies are under federal and local jurisdiction, but state airport officials issue contracts and agreements with pilots and businesses. While the FAA has indicated that plane operators need to abide by state law and county ordinance, the contract signed by the particular pilot in question did not specifically allow or deny the operation of a tow banner business.”

The plane operator, Aerial Banners North (ABN), has received a federal waiver to conduct banner towing operations nationwide, but state and city officials have strongly asserted that aerial advertisement is illegal under local law. ABN has argued that the waiver allowing them to operate across the nation, and in Hawaii, supersedes any state or county prohibitions.

On Monday, the Federal Aviation Administration clarified that the waiver granted to Aerial Banners North which authorizes the company to conduct banner towing operations nationwide, “does not waive any state law or local ordinance. Should the proposed operations conflict with any state law or local ordinance, or require permission of local authorities or property owners, it is the operator’s responsibility to resolve the matter.”

“I care about the threat of aerial banners flying over Hawaii's tourist destinations, ruining the natural beauty, interfering with outdoor recreation and enjoyment of residents and tourists. Most importantly, if we don't act, this will set a bad precedent, opening the flood gates for more aerial advertising in Hawaii's skies,” added Brower, Chair of the House Tourism Committee.
Posted by Unknown at 12:15 PM No comments: 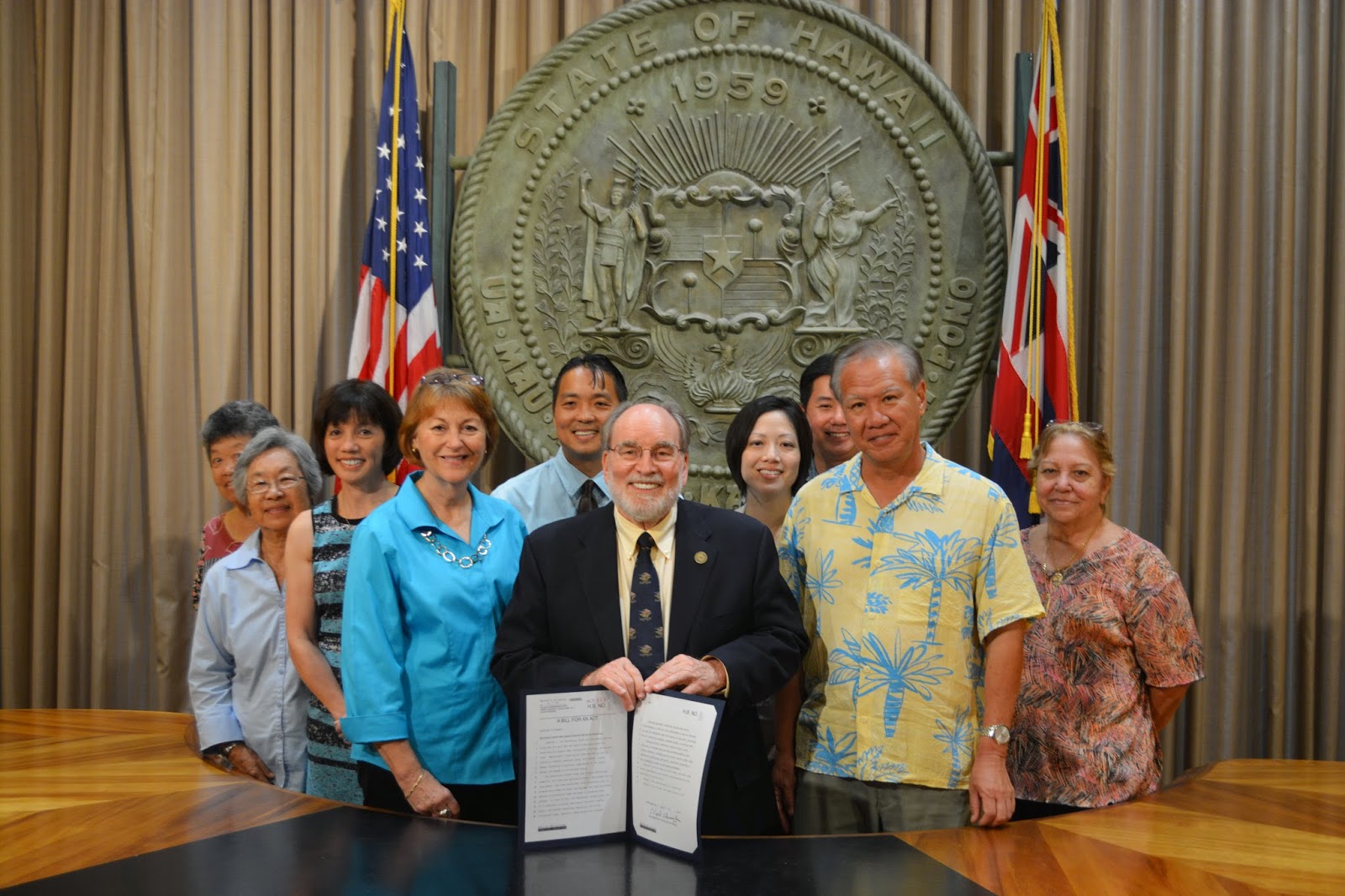 HB611 HD1 CD1, a measure to protect the health of minors by making it unlawful for tanning facilities to allow individuals under age 18 to use tanning equipment utilizing electromagnetic radiation, was signed into law by Governor Neil Abercrombie. The law will allow the Department of Health to impose fines of up to $250 for a first violation and $500 for subsequent violations.

“Young people are especially susceptible to the risk of skin cancer from ultraviolet radiation,” said Representative Gregg Takayama (Pearl City, Waimalu, Pacific Palisades), who introduced the bill. “The use of indoor tanning devices are directly linked to skin cancer. Studies show indoor ultraviolet (UV) tanners are 74 percent more likely to develop melanoma that those who do not tan indoors.”

“This bill protects minors by preventing them from using indoor tanning equipment until they reach an age when they are better able to weigh the benefits and dangers of the practice,” said Representative Della Au Belatti (Makiki, Tantalus, Papakolea, McCully, Pawaa, Manoa), House Health Committee Chair.

“Many people don’t know that tanning via artificial ultraviolet light delivers 10-15 times higher the radiation than the mid-day sun” noted Senator Roz Baker (South and West Maui) who introduced similar legislation in the Senate. “I’m delighted to see this bill become law because it will help save lives,” she concluded. 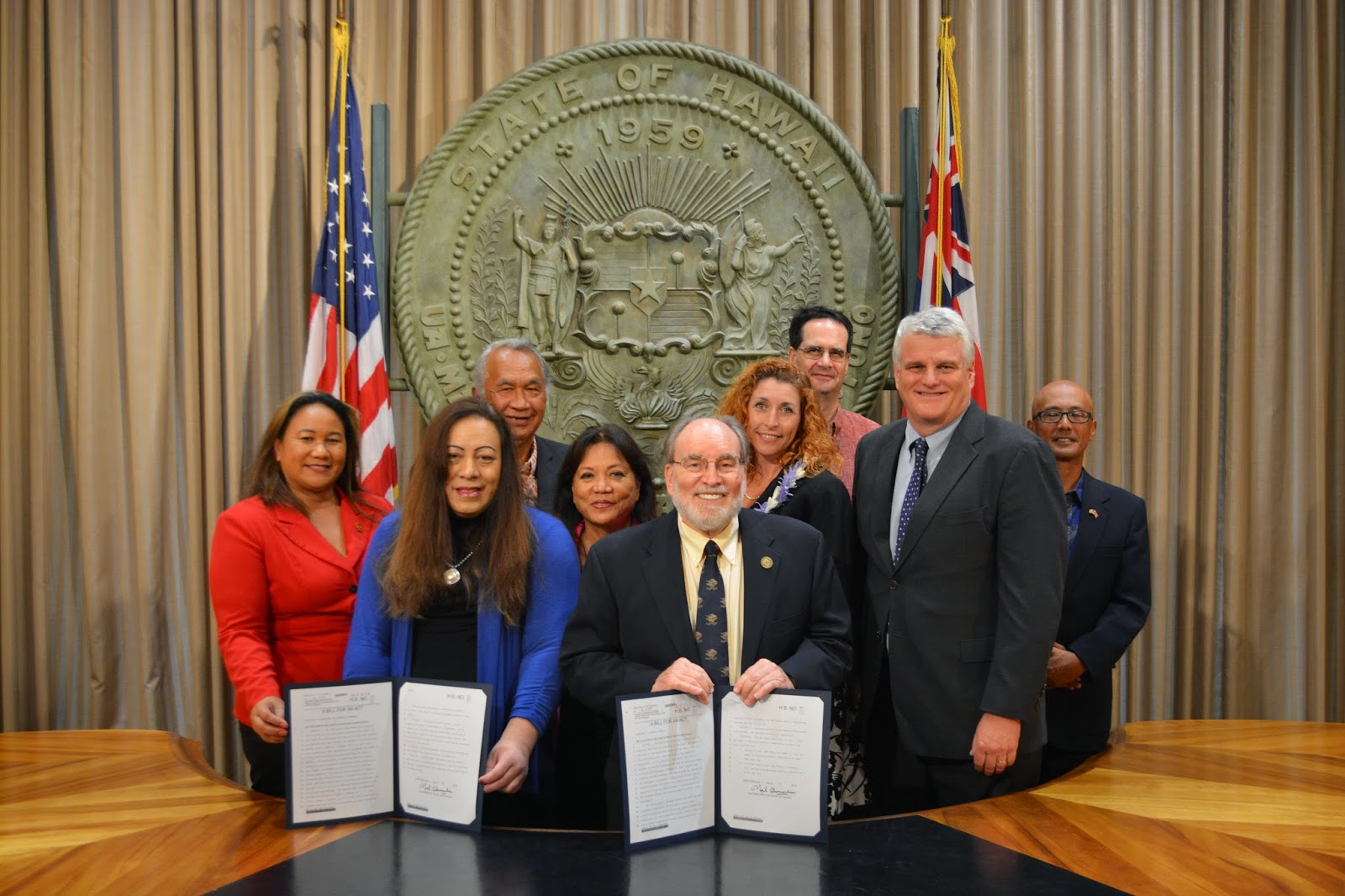 Hawaii has taken a step towards recognizing that juveniles are constitutionally different from adults and that these differences should be taken into account when children are sentenced for adult crimes. Signed into law today by Governor Neil Abercrombie, HB2116 eliminates the sentence of life imprisonment without the possibility of parole for juvenile offenders.

“Hawaii is one of a shrinking number of states that still allows life sentencing without parole for juvenile offenders,” said the bill’s introducer Representative Karen Awana (Ewa Villages, Kalaeloa, Honokai Hale, Nanakai Gardens, Ko Olina, Kahe Point, Nanakuli, Lualualei, Maili). “In addition, it has been uniformly rejected by the international community and it’s time we remove this law from our books. Right now the United States is the only nation in the world that allows children to be sentenced to life imprisonment without parole.”

Hawaii’s current law establishes that persons who are convicted of first degree murder or first degree attempted murder are to be sentenced to life imprisonment without parole—regardless of age. The changes to the law would maintain a mandatory life sentence for those above eighteen years old, but would sentence persons under the age of eighteen years old at the time of the offense to life imprisonment with the possibility of parole.

According to The Campaign for the Fair Sentencing of Youth, a national advocacy group, Hawaii now joins numerous other states who have eliminated or do not allow juvenile life without parole sentences. Such states include Texas, Wyoming, Kentucky, Kansas, Colorado, Montana, and Alaska. Additionally, other states have created measures to provide youths convicted of violent crimes an opportunity for resentencing later in life.
Posted by Unknown at 3:24 PM No comments: