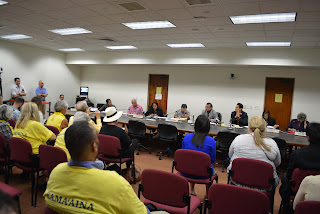 The House Health & Human Services Committee and Judiciary Committee today passed House Bill 2739 titled "Our Care, Our Choice." The bill provides the most rigorous safeguards of any state in the nation to protect terminally ill patients.

"The Legislature has carefully examined this issue over the past two decades. During the interim, we looked closely at what other states have done and heard the public's concerns," said House Majority Leader Representative Della Au Belatti (Makiki, Tantalus, Papakōlea, McCully, Pāwa‘a, Mānoa). "This bill provides strong protections for terminally ill patients and their families while allowing patients to exercise their end of life choices."

The bill allows qualified patients in Hawaiʻi with a medically confirmed terminal illness with less than six months to live and possessing decision making capacity, to determine their own medical care at the end of their lives.

The bill establishes a regulatory process under which an adult resident of the State with a medically confirmed terminal disease may choose to obtain a prescription for medication to end their life. The bill also imposes criminal sanctions for tampering with a patient's request for a prescription or coercing a patient to request a prescription.

"Our Care, Our Choice" refers to the right of people to make health choices for themselves. At least 30 states have either enacted or considered enacting similar aid in dying bills.

Additional safeguards in the bill include:

·         Confirmation by two health care providers of the patient's diagnoses, prognosis, and medical competence;
·         Two verbal requests from the patient, separated by not less than 20 days, and one signed written request that is witnessed by two people, one of whom must be unrelated to the patient;
·         Counseling required for all qualified patients with a psychiatrist, psychologist or clinical social worker to determine that the patient is capable of making an informed decision and is not suffering from undertreatment or nontreatment of depression or other conditions that interfere with their ability make an end of life choice;
·         Allowing counseling to be done via telehealth; and
·         The patient retains the right to rescind the request for life ending medication.

The bill now goes to the full House for a second reading.
Posted by James Gonser at 1:42 PM No comments:


'Bump stock' use would be illegal to keep, sell or possess in Hawaiʻi

With a unanimous vote, the House of Representatives Committee on Consumer Protection & Commerce today passed House Bill 1908 HD2 which would prohibit multiburst triggers on firearms also known as "bump stocks."

This bill would amend current law so that any person in this State who manufactures or causes to be manufactured, imports into the State, keeps for sale, or offers or exposes for sale, or who gives, lends, or possesses any multiburst trigger activator shall be guilty of a class C felony.

"In light of the recent shooting tragedies in Florida and Las Vegas, we must be proactive in prohibiting weapons that are used to murder people," said Rep. Roy M. Takumi (Pearl City, Mānana, Waipi‘o), Chair of the Consumer Protection & Commerce Committee. "This bill is a positive step toward that goal."

At Marjory Stoneman Douglas High School in Parkland, Florida last week, 17 people were killed by a gunman. On October 1, 2017, a gunman opened fire on a crowd of concertgoers at a music festival in Las Vegas leaving 58 people dead and 851 injured. The shooter used bump stocks to allow his semi-automatic rifles to fire at a rate of a fully automatic weapon.

HB 1908 defines a "multiburst trigger activator" as a device that simulates automatic gunfire by allowing the standard function of a semiautomatic firearm with a static positioned trigger finger, or a device that fires multiple shots with the pull and release of the trigger. It can also be defined as a manual or power-driven trigger activating device constructed and designed so that when attached to a semiautomatic firearm it simulates automatic gunfire.

Bump stocks fit over the stock and pistol grip of a semi-automatic rifle and allows the weapon to fire rapidly, as many as 400 to 800 rounds per minute, emulating a fully automatic firearm.

The measure now moves to a full vote on the House floor.

Posted by James Gonser at 4:48 PM No comments: