Drunk drivers will have breathalyzers installed in vehicles 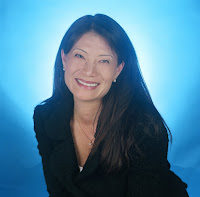 Representative Sharon Har has one more thing to celebrate this New Year. A bill she introduced requiring drivers convicted of drinking under the influence of alcohol to have a breathalyzer installed in their vehicles will become law on Saturday, January 1, 2011. Rep. Har was inspired to introduce the legislation after being injured in a 2007 head-on collision in which a multiple-conviction drunk driver smashed into her car.

“After several years of hard work, I am so pleased that the ignition interlock program will finally be law in our state,” said Rep. Har. “As a victim of a repeat drunk driver, I will feel safer knowing that these devices will now be used in Hawaii, and I also hope their existence serves as an important reminder to not drive while intoxicated in the first place. By deterring drivers from getting behind the wheel while drunk, ignition interlock devices are certain to save lives on our state’s roads.”

The breathalyzer, known widely as ignition interlock, forces a driver to blow into it to start the vehicle. The system will not allow the car to start if the the alcohol concentration on the breath is .02 or higher. To deter tampering with the device, a camera mounted on the windshield will record who is blowing into the device. In addition, frequent retests - monitored by vendors and reported to the state - are administered throughout the duration of the drive.

What you should know about the new law:
Appropriate as one of the final blog posts of 2010, it should serve as a reminder to all of us to celebrate safely and drive cautiously as we ring in the New Year. Hau'oli Makahiki Hou from the House Blog team!
Posted by Thelma at 4:18 PM No comments:

State House and Senate money committees will start holding informational briefings on the recent state tax forecast by the Council on Revenues (CoR) and other state budget matters starting Monday, January 3, 2010. The CoR yesterday reported an increase from 2 percent to 3 percent in tax collections for this fiscal year which ends in June. The new forecast will lower the projected $71.6 million deficit by $44 million. Economists say that the higher forecast for this fiscal year is due to improvement in tourism as the economy recovers from the recession.

"This is good news. It helps the governor address the current shortfall by $44 million, and it means we have an additional $100 million to use in the biennium budget. This is positive. It's a good sign."

The next COR projection will be in March.

Find all current notices of future informational briefings and hearings here.
Posted by Thelma at 2:17 PM No comments:

Rep. Della Au Belatti's December newsletter is available on the blog. Read it here.
Posted by Thelma at 9:53 AM 1 comment: 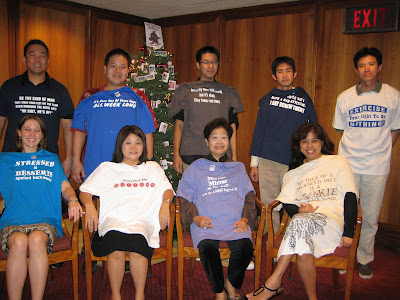 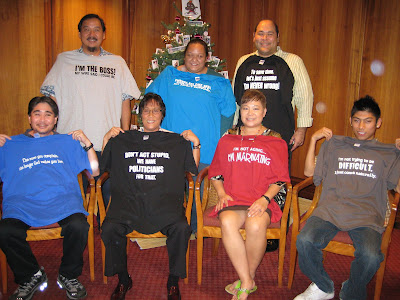 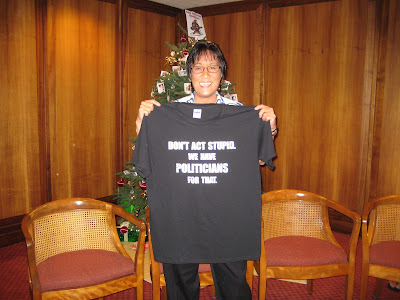 Representatives from Friends of the Library of Hawaii today surprised Rep. Marcus Oshiro with an announcement that he was selected to receive the organization's Legislator of the Year Award for his support and commitment to Hawaii public libraries. 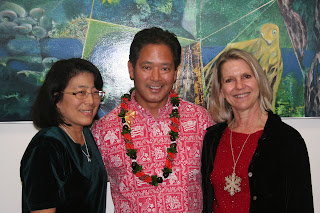 Susan Li, president of the board, and Byrde Cestare, executive director, visited Rep. Oshiro's office to give him a lei and personally invite him to accept the award on January 12, 2010 during a special ceremony to be held at Washington Place from 8 - 9 a.m.

Rep. Oshiro joins a distinguished group of past award winners. In 2008, Sen. Clarence Nishihara was named Legislator of the Year. And the first person to ever receive the award happens to be newly-elected Governor Neil Abercrombie, awarded in 1985 when he was a Hawaii State Senator.

On the next episode of "Kukui Connection", Rep. Marilyn Lee will introduce and talk with one of the newly elected freshmen, Rep. Linda Ichiyama. Rep. Ichiyama is also the youngest member of the House of Representatives.

On the show, they discuss Ichiyama's background, including:

*Student member of the Board of Education while at Moanalua High School
*Degree from Georgetown with the B.A. in International Politics
*Working for then-Congressman Neil Abercrombie
*Law School
They also talk about what committees Ichiyama is hoping to serve on, and some of the issues that are important to her community of Moanalua Valley, Salt Lake, Aliamanu and Moanalua Gardens.
Kukui Connection will air on Sunday, December 26th, 4:00 p.m. on Oceanic Channel 54. This show repeats on January 9 and 16, 2011.
Posted by James Gonser at 1:20 PM No comments: 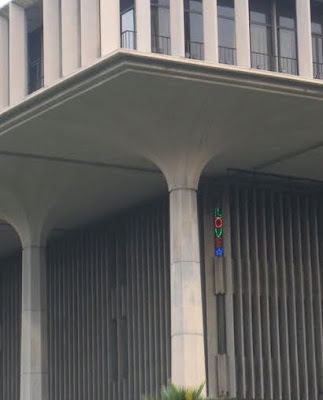 Rep. Marcus Oshiro has put up his annual Christmas lights. See them at the State Capitol, 3rd floor, corner of Beretania and Punchbowl Streets.
Posted by James Gonser at 3:26 PM No comments:

Getting ready for session 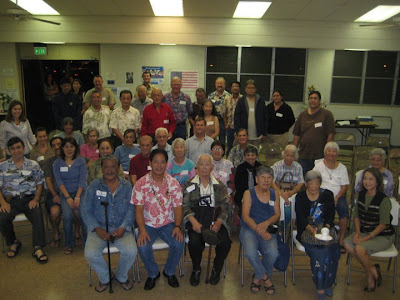 Posted by James Gonser at 9:26 AM No comments:

The following are some of the laws (those most likely to impact the general public) slated to take effect on January 1, 2011. Click on the bills to get more information.

Part I of the bill is amended to repeal the deduction of political contributions from taxable income. This becomes effective on January 1, 2011 and applies to taxable years beginning after December 31, 2010.

Corporations that contribute $1000 or more to a candidate or candidate committee within a two-year election cycle must file a report to the Campaign Finance Commission.

Changes the date of Hawaii's Primary Election from the 2nd to the last Saturday in September to the 2nd Saturday of August.

In relation to the humane treatment of animals, the new law defines primary pet enclosure to mean any kennel, cage or structure used to restrict an animal to a limited amount of space. Redefines the term "necessary sustenance" by expanding the area of confinement, and to include veterinary care when needed to prevent suffereing.

Requires coverage for the screening of colorectal cancer by colonoscopy and any other screening modalities that have received a grade of A or B from the US Preventative Service Task Force. Beginning March 1, 2011, requires all health insurance providers to inform their insured of the risk associated with undiagnosed colorectal cancer.

Email ThisBlogThis!Share to TwitterShare to FacebookShare to Pinterest
topics: Legislature 2010

Senator Will Espero on Kukui Connection

Senator Will Espero (District 20: Ewa Beach, Ewa by Gentry, Ocean Pointe, Ewa Villages, West Loch, Honouliuli, Lower Waipahu) will be Rep. Marilyn Lee's next guest on The Kukui Connection. The major topic of the program is the controversial fireworks issue. The show airs on December 19, 2010 and repeats on January 2, 2011, Olelo Channel 54, Sundays at 4:00 p.m.

On fireworks, the two veteran lawmakers discuss the fireworks bill passed by the Honolulu City Council earlier this year and the Illegal Fireworks Task Force chaired by Senator Espero and House Rep. Faye Hanohano. The task force meets for the last time on December 13th and will present a report to the legislature with recommendations in January.
Other critical issues for the district include the development of UH West Oahu, slated to open in 2012, the new Disney Hotel - Aulani, a new prison on Maui, and what to do about the Hawaii prisoners on the mainland.
See more on Senator Espero's legislative activities here.
Posted by James Gonser at 3:22 PM No comments:

The freshmen representatives have been given temporary office space until further notice. Here's where the public may find their offices and phone numbers. Click here. 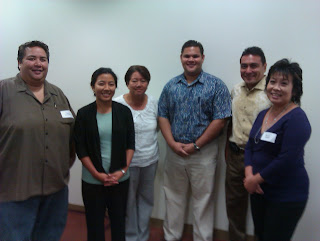 Social media gurus L.P. Neenz Faleafine and Melissa Chang stopped by the capitol today to talk to freshman lawmakers about using social media tools to connect with the people in their communities. The presentation was part of a Media Roundtable Workshop, which included journalists from print, radio and online news sources. 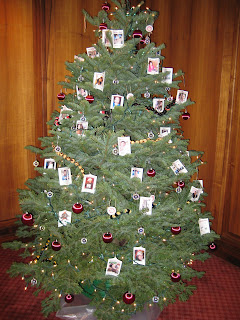 The House obviously has some serious Hawaii Five-0 fans. The theme for this year's House Christmas tree, the creative work of the elves in the Chief Clerk's Office, is a salute to Kukui High School. 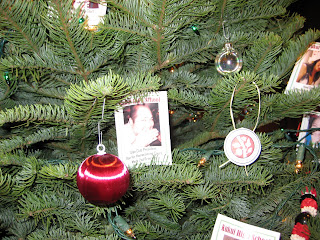 If you are at the State Capitol, we encourage you to visit the tree in person to see the detail of the ornaments with pictures of the "alumni".

Kukui High is the fictional high school featured on the reboot of the Hawaii Five-0 series. Die-hard fans have created their backstory, such as:

Kukui High is the Home of the Fighting Nuts.
The virtual yearbook can be found here.
The school newspaper is the Kukui High Courier, found here.

Posted by James Gonser at 4:47 PM No comments:

Email ThisBlogThis!Share to TwitterShare to FacebookShare to Pinterest
topics: Christmas 2010

"We the Powerful" workshops to be held on Big Island

These free, popular workshops will be on the Big Island next week. Prepared and presented by the Public Access Room, attendees will learn how to participate in the legislative process without having to fly to Honolulu.

Email ThisBlogThis!Share to TwitterShare to FacebookShare to Pinterest
topics: Legislature 2011 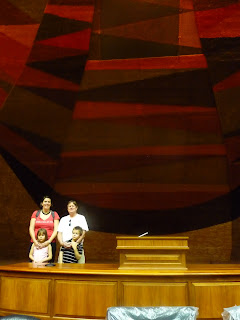 The Smith family below the tapestry by artist Ruthadell Anderson
Two of the most stunning works of art commissioned for the Hawaii State Capitol are the tapestries that grace the chambers of the House of Representatives and the Senate. The tapestries are composed of geometric shapes; the tapestry in the Senate is colored in cool tones to represent the sea and sky, the tapestry in the House is colored in warm tones to represent the volcanic earth.
Last Friday, I happened to be in the House Chief Clerk's Office and stopped for a few minutes to watch Denise Liu put the finishing touches on their Christmas tree. As I was about to leave, a family of four, the Smith family from Arizona, came around the corner and stopped to hear the story of the tree. As it turned out, they were also hoping to see the tapestry in the chamber, but were disappointed that the room was locked.
Serendipitously, who should walk by but Lon Paresa, the Assistant Sergeant-at-Arms, who had the key to the Chamber door. Zachary Smith, the father, explained that the tapestry was done by his aunt and uncle, Ruthadell and Webster Anderson. Ruthadell is most often credited as the artist of the tapestries in both House and Senate, but according to Smith, his uncle Web Anderson had a hand in designing the pieces and Ruthadell was the primary weaver.
According to Baron Gushiken, who has been leading Capitol tours for decades, the tapestry is 39 feet tall, 25 feet wide at the top and 29 feet wide at the bottom. It has the appearance of a Hawaiian warrior's cape. The Andersons used 800 pounds of moth-proofed wool set against a heavy linen warp. There tapestry contains 49 panels, and 25 artisans worked with Anderson to tie about a million "giordes" knots within the weave.
Zachary Smith is a Regents Professor of Environmental and Natural Resources, Policy and Administration, Politics and International Affairs, at Northern Arizona University. Earlier in his career, he taught at the University of Hawaii at Hilo.
Posted by James Gonser at 9:38 AM No comments:

Email ThisBlogThis!Share to TwitterShare to FacebookShare to Pinterest
topics: Art at the Capitol

Rep. Isaac Choy issued his Prevailing Winds newsletter for the holidays. Read it here.
Posted by James Gonser at 3:08 PM No comments:

Rep. Della Belatti's November newsletter is now available on the blog. Read it here.
Posted by James Gonser at 1:44 PM No comments: