Measures, amended by Senate, go to Governor for his consideration

The full House passed three measures April 26 relating to: the sharing of digital images of a voter’s marked ballot, possession of firearms by individuals who have misdemeanor convictions of stalking or sexual assault, and discrimination based on gender identity.
HB27 SD1, allows a voter to distribute or share an electronic or digital image of the voter's own marked ballot via social media or other means. The intent of the measure is to repeal the prohibition against willfully exhibiting one's own ballot at polling places during an election. The prohibitions originally related to the operation of polling places, where it was meant to prevent voters from declaring how they voted in order to encourage others to vote in the same way.
The prevalence of electronic mobile devices and social media applications and platforms increases the opportunities for people to display their ballots via social media, which are commonly known as "ballot selfies." This measure clarifies that voters may exhibit their own ballots, which includes the dissemination of ballot images electronically or digitally.
HB625 HD1, SD1 prohibits a person from legally owning, possessing, or controlling any firearm or ammunition, if he or she was convicted of misdemeanor stalking or sexual assault. The Honolulu Police Department, Americans for Responsible Solutions, Domestic Violence Action Center, Center for American Progress, BradyHawaii, IMUAlliance, and others testified in support of this measure.
Supporters noted that actions such as stalking and misdemeanor sexual assault are precursors to more extreme acts of domestic violence and that precautions are necessary to prevent individuals convicted of these offenses from accessing firearms. Disqualification from firearms ownership for a misdemeanor offense requires a conviction, unlike disqualification for a felony offense which only requires an indictment.
HB2084 HD2, SD1 prohibits all insurers in the state, including health insurers, mutual benefit societies, health maintenance organizations, and health benefits plans under chapter 87A, Hawaii Revised Statutes, from discriminating against any person on the basis of a person's actual gender identity or perceived gender identity.
The bill was initiated in response to the fact that many health insurance plans and policies include some form of transgender-specific exclusions. As a result, transgender individuals may be excluded from healthcare coverage based on actual gender identity or perceived gender identity, rather than because of lack of medical necessity of treatment. In addition, these exclusions may also prevent transgender individuals from obtaining common wellness care treatment.
The three bills, which were amended by the Senate, now go to the Governor for his review along with 13 other bills passed April 26.
Posted by James Gonser at 1:27 PM No comments: 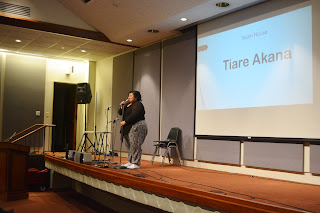 Everyone had a great time as House and Senate teams took the stage in the State Capitol Auditorium April 21 to raise funds for the Hawaii Food Bank during the fourth annual Capitol Idol 2016.

The House Team won the group event and Tiara Akana won the individual event. But most important was $1,164 was raised for the Food Bank.

More photos.
Posted by James Gonser at 3:30 PM No comments: 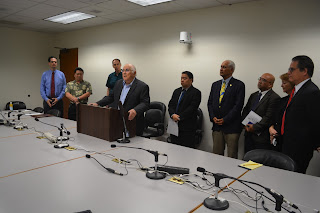 Honolulu, Hawaii—In response to Alexander & Baldwin’s announcement that the company will provide full and permanent restoration of streams in East Maui, members of the State Legislature expressed their appreciation and support.  At the urging of the Legislature, A&B announced today its plan to restore water to taro farmers in East Maui.

“I see this as a promising approach to finding real solutions to the many water rights issues on Maui,” said House Speaker Joseph M. Souki.  “With the end of sugar, Maui is truly at an important turning point, entering unchartered territory.  We need to re-think old assumptions and look for resolutions beyond the purview of the courts.”

“While there are still details to be hammered out and much work to be done, I am hopeful that this first step puts us in the right direction and toward productive compromise on waters rights issues on Maui,” Souki said.

“The announcement to restore these streams is a good first step and a starting point in the healing process on Maui,” said Senator Mike Gabbard, chair of the Senate’s Water, Land and Agriculture Committee. “As I said in committee hearings, and on the Senate floor, we need to roll up our sleeves and continue our work to find the middle ground. I’m hopeful that the restoration of these streams helps us find a productive compromise that’s fair to folks on both sides of this debate.”

"The restoration of water in the streams is a step in the right direction.  The Legislature is committed to providing the additional resources to assess the health of our streams," said Representative Ryan Yamane, chair of the House Water and Land Committee.  "This will protect the future use of Hawaii's important agricultural lands.  The preservation of our water and our land is a priority for the health and vitality of Maui's agricultural production which is key to Maui's resilience."

"A&B's unilateral decision to restore 100 percent of the water in East Maui streams is an excellent beginning point for all of us to begin the healing process, said Sen. J. Kalani English, senate majority leader.  "Many Hawaiian families - my family - has had generations of suffering and pain over the loss of water.  Today I hope that we can begin reconciliation as the waters flow again in East Maui."

The streams to be fully and permanently restored are:  Honopou, Hanehoi (Puolua), Piinaau, Palauhulu, Waiokamilo, Kualani, and Wailuanui (East and West).  A&B will work to restore the streams as soon as possible, with some diversions modified immediately and others requiring reconfiguration.
Posted by James Gonser at 12:35 PM No comments: 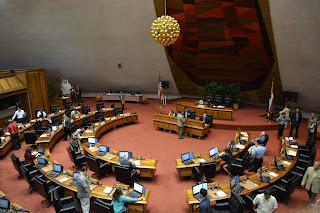 “These bills represent a broad range of concerns for the state, from affordable housing and homelessness to interisland transportation,” said Joseph M. Souki, Speaker of the state House of Representatives.  “They address the needs of our keiki, victims of crime, medical patients, and our kupuna, and go a long way in making life and lives better in Hawaii.  I would like to thank the representatives, their staff, the state departments, the private and nonprofit organizations, and every Hawaii resident who took the time to provide input so that we could create and improve the laws that govern us all.”

Among the bills passed by the House were:

EDUCATION
SB3126 SD2 HD2, which authorizes the issuance of general obligation bonds and the use of funds from the Green Infrastructure Loan Program to implement and expedite cooling measures in public school classrooms, and requires the Department of Education to become net-zero with respect to energy use by January 1, 2035;

SB2624 SD2 HD1, which provides a state income tax credit for certain expenses paid or incurred by school teachers, special education teachers, school librarians, and counselors for supplementary materials used in the classroom, as well as for accompanying students for educational travel;

AFFORDABLE HOUSING
SB2833 SD2 HD2, which amends the state low-income housing tax credit and bases the amount of the tax credit on whether a building is financed by tax-exempt bonds;

SB2563 SD1 HD1, which amends operations of the Hawaii Public Housing Authority and funding eligibility criteria of the Rental Housing Revolving Fund to make HPHA projects eligible for loans and grants from the Revolving Fund and granting the Authority preferences and priority in loan and grant applications.  Requires the Authority to coordinate with other state agencies in developing transit-proximate affordable housing;

PUBLIC SAFETY
SB3034 SD1 HD2, known as Marsy’s Law, which proposes a ballot question for an amendment to the Hawaii State Constitution to provide the victims of crimes with specific rights related to the criminal justice process;

SB2411 SD2 HD2, which establishes requirements, restrictions, and implementation timelines for body-worn cameras and vehicle cameras for county police departments, and appropriates funds for each county to purchase body-worn and vehicle video cameras;

SB2439 SD1 HD1, which establishes exceptions to the offense of obstructing government operations and the offense of violation of privacy in the second degree for a person making a video or audio recording or photograph of a law enforcement officer while the officer is in the performance of duties in a public place or under circumstances in which the officer has no reasonable expectation of privacy;

SB2196 SD2 HD1, which establishes a law enforcement officer independent review board within the Department of the Attorney General to investigate incidents of officer-involved death;

SB2816 SD1 HD2, which adds the offense of criminal trespass onto state lands to the penal code, amends criminal trespass in the second degree to apply to government agricultural property regardless of whether it is fenced, enclosed or otherwise secured;

HEALTH
SB2384 SD1 HD1, which requires the Department of Health to conduct unannounced visits and inspections, including inspections for relicensing and recertification, for certain state-licensed or state-certified care facilities and unannounced inspections for license renewals for medical marijuana production centers and dispensaries;

SB2181 SD2 HD2, which permits manufacturers of investigational drugs or biological products beginning on January 1, 2017, to make these drugs and products available to terminally ill patients under certain conditions;

SB2319 SD1 HD3, which requires health insurers in the state, including health benefits plans under the Hawaii Employer-Union Health Benefits Trust Fund and Medicaid managed care programs, to cover reimbursement for contraceptive supplies intended to last for up to a 12-month period for an insured;

SB3084 SD1 HD2, which authorizes the state Department of Health to establish a cesspool tax credit or rebate program to facilitate cesspool conversions or improvements by residents;

TRANSPORTATION
SB2618 SD1 HD2, which directs the state Department of Transportation to conduct a feasibility study on establishing an interisland and intra-island ferry system;

ENDANGERED SPECIES
SB2647 SD1 HD2, which prohibits the sale, purchase, trade, possession with intent to sell, or barter of any part or product, including ivory, from animal species that are threatened with extinction;

The House also passed the Judiciary supplemental budget.  Both chambers have until Thursday, April 14, to pass on third reading any remaining bills before the Second Crossover deadline.

For more information on all of the Senate bills passed by the House so far this session, see the links to the (amended) and (unamended) bills.

Posted by James Gonser at 12:49 PM No comments: