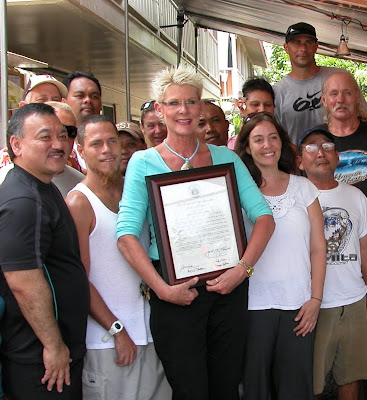 Received a $30,000 Grant-in-Aid from State Legislature

Alahou Clean & Sober, the only long-term housing facility on the Big Island for individuals with a dual diagnosis of addiction combined with mental illness, was honored in Kona for its work with at-risk individuals. The facility is unique in that half of the Board of Directors is comprised of Alahou residents. There is also a Residents Council made up of residents who monitor each other for suspected drug or alcohol use. Alahou is an ohana of 60 family members where everyone participates and supports each other.

"When Po'ailani pulled out they left 72 residents, several who were severely mentally ill, who would have become homeless if we had not stepped in." said Sandi McCoy, Executive Director of Alahou Clean & Sober. "We were left with nothing as Po'ailani took all the toilet paper, soap, cleaning supplies, everything so we literally rose from ashes just like the phoenix which is our symbol. Alahou means New Beginning."

"Alahou performs a crucial function in the Kona community providing a safe, sober and stable environment for some of our most at-risk individuals," said Representative Nicole Lowen (Kailua-Kona, Holualoa, Kalaoa, Honokohau). "Sandi has done a terrific job at Alahou which is more like one big ohana where everyone looks after each other."

"The grant-in-aid funds from both the State and the County were necessary due to the loss of funds from an annual grant from Shipper's Wharf and lower funding from United Way." said Vice Speaker John Mizuno who, along with Rep. Lowen, presented Sandi McCoy with a certificate recognizing her achievements. "It is so important to keep facilities like Alahou open to help individuals who would have no other option than homelessness."
Posted by Unknown at 10:13 AM 3 comments: 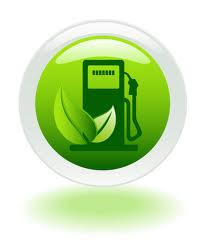 KAUAI RECEIVES $5 MILLION FROM DEPARTMENT OF ENERGY FOR BIOFUELS PROJECT

Hawaii BioEnergy was awarded a $5 million grant to develop a cost-effective photosynthetic open pond system to produce algal oil at its research facility near Lihue, Kauai. The funding is part of $22 million in new investments by the U.S. Department of Energy (DOE) to develop cost-competitive algae fuels and streamline the supply chain for advanced biofuels across the country. Funding for the project will enable continued research into advance biofuels technologies that reduce energy use and the overall cost of extracting lipids and producing fuel intermediates.

Kauai Representative Dee Morikawa (Niihau, Lehua, Waimea, Koloa) praised the DOE’s announcement, “Hawaii has long been at the forefront of developing alternative energies and I am pleased that the U.S. Department of Energy has recognized our efforts in pursing energy security. As an island state we are extremely dependent and vulnerable to the availability of imported oil.  We must continue to foster growth in renewable energy technologies to strengthen our local economy and, most importantly, to continue a positive transition towards clean and efficient energy. This project adds to a number of other alternative energy initiatives on Kauai including solar farms and biomass production” she said.

The award is a significant step towards meeting the Hawaii Clean Energy Initiative, which seeks to relieve our state’s dependence on oil by setting goals and a roadmap to achieve 70% clean energy by 2030, with 30% from efficiency measures and 40% from locally generated renewable sources.

In 2008, the Kauai Island Utility Cooperative generated more than 90% of its energy from imported oil. The utility currently has plans to produce 35% of its energy through renewable sources by the end of 2014.

The full DOE announcement is available at: http://energy.gov/articles/secretary-moniz-announces-new-biofuels-projects-drive-cost-reductions-technological

Posted by Unknown at 9:08 AM No comments: