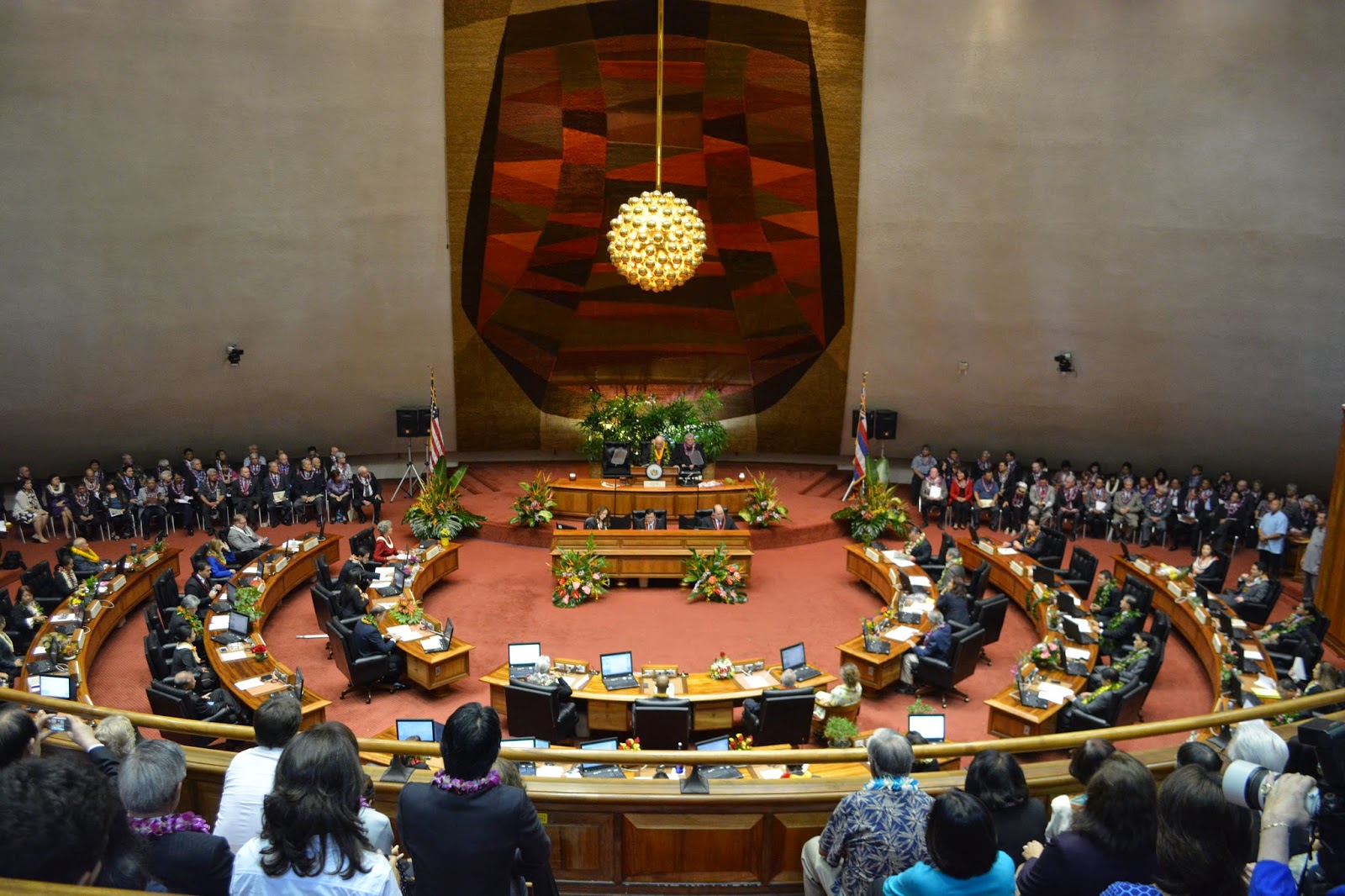 Two days before the close of session, the House today approved bills that address a wide range of issues, including raising the minimum wage, restructuring the state Health Connector, increasing the counties’ share of the State’s Transient Accommodations Tax (TAT) and approving the State Budget.

Budget considerations and measures that required funding were hampered with lower than expected revenue projections, as well as the misconception that the State was flush with a revenue surplus. Nevertheless, lawmakers were able to raise the cap on the TAT, increasing the counties’ share by $20 million over the next two years. In addition, the Legislature was able to recapitalize the state’s Hurricane Relief Fund and its rainy day fund, and continue to pay down its unfunded liabilities.

"Long-term financial obligations aside, we worked hard to respond to the needs of our kupuna and to raise the income of our families on the lowest rung of the economic ladder,” said House Speaker Joseph M. Souki. “We’ve worked to better protect our seniors from financial abuse and support them with a variety of programs and services. We passed a number of bills to improve our schools at all levels and to protect our most vulnerable from harm including our keiki.

“We’ve also made progress in protecting our environment and our economy from destructive invasive species and will create a task force to look into planning for catastrophic events because of climate change.”

Additionally, this session is the first time since the 2008 Legislative session that a joint House and Senate Majority Package has been offered (SB2345, SB2346 and HB1714 focus on helping seniors and addressing climate change). The significance of such a package is that the included bills are considered to have statewide importance and the commitment of the majorities of both chambers.

Highlights of the measures passed include:

EDUCATION
SB2134, SD1, HD1, CD1 amends various sections of chapter 302A, HRS, relating to Department of Education schools to comply with the requirements of the federal Individuals with Disabilities Education Act.

SB2768, SD2, HD2, CD1 makes kindergarten mandatory for children who will be at least five years of age on July 31 of the school year, unless otherwise exempt.

SB1233, HD1, CD1 requires certain private employers to allow employees to take leaves of absence for organ, bone marrow, or peripheral blood stem cell donation. Provides that unused sick leave, vacation, or paid time off, or unpaid time off, may be used for these leaves of absence. Requires employers to restore an employee returning from leave to the same or equivalent position. Establishes a private right of action for employees seeking enforcement of these provisions.

HOUSING
HB1539, HD1, SD2, CD1 requires the return of a housing choice voucher to the Hawaii Public Housing Authority upon the death or removal from assistance of the last original household member or upon the youngest minor of the household reaching the age of twenty-one or twenty-three if the minor is a full-time student. Prohibits adding legal guardians to the household unless the legal guardian is also eligible for participation in the program.

HB2581, HD3, SD2, CD1 establishes the State Innovation Waiver Task Force to develop a plan for applying for a state innovation waiver that meets the requirements of federal law. Requires the task force to submit two interim reports and a final report to the Legislature.
SB2866, SD1, HD1, CD1 makes an emergency appropriation of $15,000,000 to support the functions of the Hawaii Health Systems Corporation.

HB611, HD1, SD1, CD1 makes it unlawful for tanning facility owners, lessees, and operators to allow use of tanning beds, tanning booths, sun lamps, and certain other tanning equipment by anyone under the age of 18.

HB1951, HD1, SD2, CD1  extends the authorization of the issuance of special purpose revenue bonds to Honolulu Seawater Air Conditioning, LLC, for the purpose of design and construction of a seawater air conditioning district cooling system in downtown Honolulu, for an additional five years.

SB2953, SD1, HD3, CD1 provides that all royalties from geothermal resources on Department of Hawaiian Home Lands parcels shall be paid to DHHL.

PUBLIC SAFETY
HB1750, HD1, SD1, CD1  expands the offense of violation of privacy in the first degree to include knowingly disclosing an image or video of another identifiable person either in the nude or engaging in sexual conduct without the consent of the depicted person and with intent to harm substantially the depicted person.

SB2729, SD2, HD1, CD1  amends the law prohibiting operation of a motor vehicle while using a mobile electronic device by adding an exemption for completely stopped drivers that have the engine off and are in a safe location out of the way of traffic, amending the definition of "operate", amending the penalties for violations, and deeming a violation to be a traffic infraction.

SB2591, SD1, SD1, CD1 requires additional detail and updating for annual reports to the Legislature of police misconduct; requires retention of disciplinary records for the later of eighteen months after reporting or the date according to the county police department's record retention policy; permits disclosure under the Uniform Information Practices Act of certain information regarding misconduct by a police officer only in cases that result in the discharge of an officer and if specific factors are met, including the passing of ninety calendar days following the issuance of a decision sustaining the discharge.

HB1926, HD1, SD1, CD1 amends the offense of prostitution to include sadomasochistic abuse under the definition of "sexual conduct" and clarify that a law enforcement officer shall not be exempt from the offense if the law enforcement officer engages in sexual penetration or sadomasochistic abuse while acting in the course and scope of duties. Amends the offense of solicitation of a minor for prostitution. Clarifies sentencing of repeat offenders and enhanced sentences for repeat violent and sexual offenders. Amends the applicability of a deferred acceptance of guilty plea or nolo contendere plea.

SB2687, SD1, HD2, CD1 extends the time period during which a victim of child sexual abuse may bring an otherwise time-barred civil action against the victim's abuser or an entity with a duty of care, including the State and counties.

HB2034, HD2, SD1, CD1 removes the statute of limitations for criminal actions arising from sexual assault in the first and second degrees and continuous sexual assault of a minor under the age of fourteen years.

SB2308, SD1, HD1, CD1 makes an appropriation to the Department of Public Safety for programs and services for children of incarcerated parents and to assist with family reunification.

HB1993, SD2, CD1 requires a police officer to make reasonable inquiry of witnesses and the family or household member upon whom physical abuse or harm is believed to have been inflicted and order a no-contact period of forty-eight hours. Makes the commission of an act of physical abuse in the presence of a family or household member who is a minor under the age of fourteen a class C felony.

HB1671, HD1, SD1, CD1 increases the current cap on transient accommodations tax revenues to be distributed to the counties for two fiscal years. Establishes a working group to determine future county allocation ceiling amounts and the appropriate division of the provision of public services between the State and counties.

ELECTIONS, GOVERNMENT AND TRANSPARENCY
SB2682, SD1, HD2, CD1 requires the financial disclosure statements of members of certain boards, commissions, and agencies to be made available for public inspection and duplication. Limits information on the source of income of the spouse and dependent children of those whose financial disclosures are public to the name of the income source.

SB2634, SD1, HD2, CD1 specifies that individuals required to file an expenditure statement for lobbying activities must, for expenditures in excess of $750 per statement period, itemize each expenditure in certain categories, as applicable.

CULTURE AND ARTS
HB2051, HD1, SD2, CD1  amends the criteria for the works of art to be commissioned to honor the late U.S. Senator Daniel K. Inouye and the late U.S. Representative Patsy T. Mink pursuant to Act 281, SLH 2013. Amends the appropriation to $250,000 for fiscal year 2014-2015 only. Makes the Hawaii State Foundation on Culture and the Arts the expending agency.
Posted by Unknown at 6:56 PM No comments: 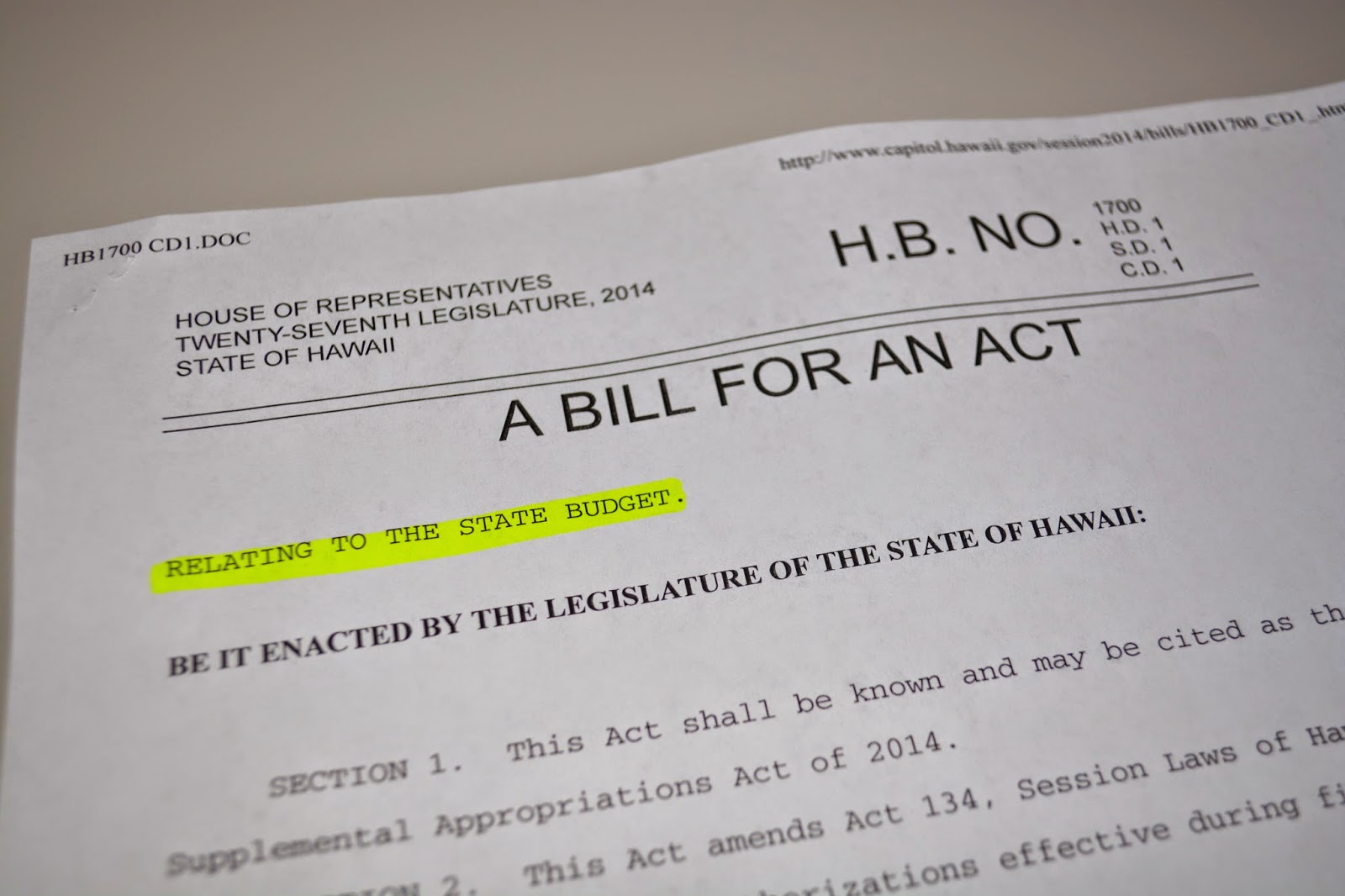 The Hawaii State Legislature today voted to approve the State Budget for the upcoming FY2014-2015. The budget, which provides $6.189 billion in general funds and $12.147 billion in all means of financing, was characterized by House Finance Chair Sylvia Luke as measured and prudent.