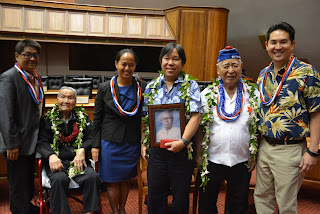 The Hawaii House of Representatives was honored today to host the presentation of the French Legion of Honor decoration to three Nisei veterans of US Army’s 100th Infantry Battalion, 442nd Regimental Combat Team for their service during World War II.

“The House of Representatives and Speaker Scott K. Saiki are so happy that our chamber could serve as the venue to honor these brave men,” said Vice Speaker Della Au Belatti. “The Legion of Honor is France’s highest award and it recognizes the bravery and sacrifice that these men made to protect the freedoms that we enjoy today.”

The 100th Infantry Battalion, 442nd Regimental Combat Team was comprised of Japanese Americans, most of them from Hawaii. The men volunteered and fought in Europe during the war, becoming the most highly decorated unit in the history of the United States for its size and length of service.

Representatives Scott Y. Nishimoto and Mark M. Nakashima also attended the event and presented lei to the honorees.
Posted by James Gonser at 2:02 PM No comments:

Honolulu, Hawaii – The Hawaii House of Representatives voted in Special Session today to pass Senate Bill 4 to fund the City’s $8.2 billion rail project. The vote was 31 yes, 15 no and five excused.

The Senate passed the measure on Wednesday. The bill now goes to Governor David Ige for his consideration.

The bill will provide about $2.39 billion to complete construction of the rail project to Ala Moana and provide a secure funding source to ensure continued federal support.

House Speaker Scott K. Saiki (Kakaako, Downtown) said after passing this funding bill, it is now up to the City to manage the project in a way that is both accountable to the taxpayers and completed within its budget.

“The legislature has taken on the responsibility of finding a way to fund rail and to secure federal funding,” Saiki said. “I want to thank our lawmakers for working together to reach this compromise.”

·         Extend the general excise tax surcharge on Oahu for three additional years, from December 31, 2027 through December 31, 2030. This will provide $1.25 billion.
·         Raise the hotel room tax charged to visitors (Transient Accommodation Tax) by one percent from 9.25 percent to 10.25 percent for 13 years, from January 1, 2018 to December 31, 2030. This also applies to timeshares. This will provide $1.25 billion.
·         The hotel room tax is collected statewide and goes directly into the general fund, not to the island where it is collected. Each county receives an allocated proportional share of the tax regardless of total amounts collected. Raising the tax does not change that amount.
·         Permanently increase the counties share of the TAT from its current $93 million base to $103 million.
·         Reduce the State Department of Taxation’s administrative fee on the GET surcharge from 10 percent to one percent.
·         Require a state run forensic audit of the rail project and annual financial reviews.

The bill also provides that funds collected for rail go into a new Mass Transit Special Fund and rather than simply give the money to the City, and requires the State Comptroller to certify HART’s invoices for capital costs as the project moves forward. This will allow the state to keep track of both spending and construction progress.

This bill addresses the immediate rail construction shortfall by collecting funds upfront through a small TAT increase instead of adding additional years of GET surcharge on the back end. This will reduce the financing costs of the project by hundreds of millions of dollars.

A rail bill that relies solely on GET will continue to tax the poor and increase the cost to taxpayers in the long term. By substantially relying on the TAT, visitors will now bare a significant portion of the financing burden.

“After hearing testimony from city officials, neighbor island residents and the public, we looked in detail at how to fund rail while creating the least amount of increase on our taxpayers,” Rep. Luke said.

“This bill is a compromise that provides the funds to get rail built. When completed, rail will be a great relief for the thousands of people stuck in traffic every day,” Rep. Aquino said. “This bill not only provides much needed oversight on spending by the State Comptroller, it also mandates accountability though audits and financial reviews.”
Posted by James Gonser at 4:00 PM No comments: