Access to Justice Commission on next episode of Jordan's Journal

On the next episode of Jordan's Journal, Rep. Jo Jordan sits down with Rep. Della Au Belatti and Chief Justice Mark E. Recktenwald to discuss an upcoming Community Briefing on the work of the Hawaii Access to Justice Commission as well as to gather input from the community planned for the Leeward Coast. The shows special guests share the history of the Commission and what community members can expect from the meeting. Belatti and Recktenwald are appointed members of the Commission.

The Hawai‘i Access to Justice Commission, created by the Hawaii Supreme Court Rule 21 in 2008, comprises judges, attorneys, legal service providers, governmental representatives, and members of the Hawai‘i legal community. The Commission's primary purpose is to substantially increase access to justice in civil legal matters for low and moderate-income residents of Hawaii.

The meeting will be held on Tuesday, December 11, 2012 from 6 - 8 p.m. at the Wai'anae District Park Multi-Purpose room. From 6 - 6:45 p.m., six service providers will be on site for a legal fair in which attendees will be able to get their initial civil legal questions answered. These service providers include:
Domestic Violence Action Center, Hawaii Appleseed Center for Law and Economic Justice, Legal Aid Society of Hawaii, Mediation Center of the Pacific, National Hawaiian Legal Corp, and
Volunteer Legal Services Hawaii. At 6:45 p.m., a formal presentation will be given by Chief Justice Mark E. Recktenwald and Associate Justice Simeon R. Acoba, Jr.

For a preview of what will happen at the Community Briefing and to learn more of the Chief Justice and Rep. Belatti, watch this episode of Jordan's Journal online (embedded below) or catch it on 'Olelo 54 on these air dates and times:

Episode 21 - Access to Justice from Jo Jordan on Vimeo.
Posted by Thelma at 3:03 PM No comments:

Welcome to the House! 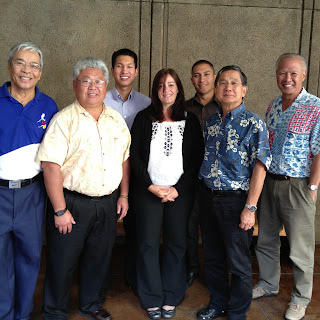 Posted by James Gonser at 3:04 PM No comments:

Prevailing Winds November 2012
Posted by Thelma at 4:01 PM No comments:

Informational meeting and talk-story session with the regional coordinator of the U.S. Interagency Council on Homelessness 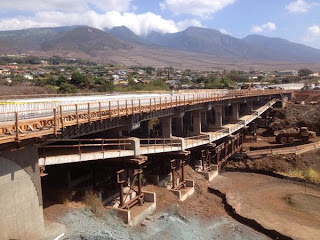 "The topping off of the bridge is a major milestone for improving traffic and road conditions for the residents of West Maui," said Rep. McKelvey.  "I am proud of the work by our legislative team to secure funding for the Honoapiilani Highway Realignment project, and thank our governor and transportation department for releasing the funds and starting the critical construction phase.  We are working together to get the job done."

The Honoapiilani Highway Realignment, popularly known as the "Lahaina Bypass Road", spans nearly a mile between Lahainaluna road and the Keawe Street extension.  Once completed, it will provide residents with an alternative route to go around Lahaina town and avoid congestion.  This first phase is expected to be completed by the end of next month, December of 2012.

The reconstructed Kahoma Stream Bridge will showcase a new design with a low profile, minimizing the obstruction of views along the scenic drive.  It also eliminates the need for pillars below the bridge, leaving the stream itself unobstructed.

State Department of Transportation Director Glenn Okimoto gave opening remarks and Governor Neil Abercrombie and Maui Mayor Alan Arakawa provided remarks on behalf of the state and the county respectively.  Attendees also heard from Bob Pure, President of the Board of Directors for Lahaina Bypass Now, and William Wilson, President of Hawaiian Dredging Construction Company, Inc.  In addition to Rep. McKelvey, the legislature was represented by Senator Rosalyn Baker for the state senate.

"This is a significant milestone in the construction of the first phase of the Lahaina bypass road,” commented Sen. Roz Baker (D-West and South Maui).  "I congratulate Wilson Okamoto Corp. for the fantastic, award-winning bridge design which preserves the gorgeous views from the roadway, is less intrusive on the landscape and preserves the functionality of the Kahoma stream channel.  Mahalo to Hawaiian Dredging, the subcontractors, and Hawaii DOT for working with the West Maui community to move this project forward.  We all look forward to opening the first phases of the long awaited road improvement later year and next January.”

"The completion of this bridge represents the begining of the materialization of the Lahaina Bypass and for the community, a realization of a long-awaited need." said McKelvey, who explained that the bypass will not only give residents a more convenient way to access the homes and schools in the area but also serve as a much-needed emergency evacuation route if the main road be blocked by fire or other disaster."

The General Contractor of the Honoapiilani Highway Realignment project is Hawaiian Dredging and the estimated design and construction cost is $24.3 million.  The blessing was provided by Reverend Earl Kukahiko.
Posted by James Gonser at 2:20 PM No comments: