Although no specific dates have been set for the special session and no rail funding mechanism has been agreed upon, Speaker Saiki and President Kouchi said that, "after working with members of our federal delegation, it was deemed necessary and prudent to assure the FTA that the Legislature recognizes and understands the requirements under the Full Funding Grant Agreement (FFGA) between the City and County of Honolulu and the FTA."

Posted by James Gonser at 12:55 PM No comments: 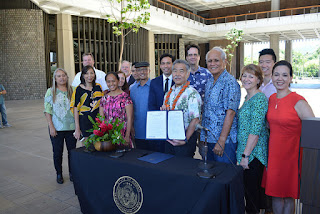 HB 1578, which establishes the Carbon Farming Task Force, and SB 559, which aligns Hawaii with the principles and goals adopted in the Paris climate accord, are now law.

“With today's bill signings, Hawaii is all in - joining the world's leaders, cities across the nation, businesses and individuals in combatting climate change threats, reducing greenhouse gas emissions and leading the way towards a more sustainable future,” said House Vice Speaker Rep. Della A. Belatti (Makiki, Tantalus, Papakolea, McCully, Pawaa, Manoa). “The House believes that developing stronger renewable energy and sustainable farming policies is not only the right thing to do, it will also help create jobs and develop clean industries that are critical to the future of our island home.”

Rep. Chris Lee (Kailua, Waimanalo) was one of the introducers of House Bill 1578 and said the bill establishes a process for local farmers to receive carbon credit dollars for agricultural practices that sequester carbon dioxide.

“It's important to commit to addressing climate change, but it's even more important that we actually take meaningful action,” said Lee, Chair of the Energy & Environmental Protection Committee. “These bills ensure local industries continue to reduce emissions and empower local farmers for sequestering carbon.”

Posted by James Gonser at 3:15 PM No comments:


“The President's withdrawal from the Paris Agreement harms our island state most of all. Local progress replacing fossil fuels with renewable energy has already saved Hawaii a third of a billion dollars and reduced carbon emissions,” said Representative Chris Lee (D-51, Kailua, Waimanalo), chair of the House Energy & Environmental Protection Committee. “However, undermining action addressing climate change elsewhere means accelerating global warming and sea level rise that will more quickly erode our beaches, endanger coastal communities, diminish our fresh water supply, and expose our families to stronger and more frequent hurricanes at great cost to our people and way of life in the islands.

“We are currently working together with elected leaders in nearly a dozen other states such as California, Oregon, Washington, New York, and Minnesota to implement climate action plans that replace fossil fuels with renewable energy despite the President's shortsighted decision.”

At the close of the 2017 legislative session Hawaii also passed House Concurrent Resolution 113 calling on all states and the federal government to take action and replace fossil fuels with renewable energy, as well as House Bill 1578, which establishes a process for local farmers to receive carbon credit dollars for agricultural practices that sequester carbon dioxide, and Senate Bill 599, which doubles down on Hawaii's commitment to coordinate state and county efforts to address climate change.
Posted by James Gonser at 10:38 AM No comments: