It has been an interesting ride this year in politics and government, with many changes, endings, and new beginnings. As the New Year approaches, let's say goodbye to 2012 with one of Hawaii's beloved songs that reminds us to live each day with the Aloha Spirit we cherish in the islands. Hau'oli Makahiki Hou! Happy New Year from the Hawaii House of Representatives!


The next episode of Jordan’s Journal is an exciting one, and one that may have you glued to your computer hours after watching it.

Former House Rep. Heather Giugni appears with Rep. Jo Jordan to talk about ‘Ulu’ulu, an online repository of Hawaii film footage dating as far back as 1928.

After watching the episode, I browsed the website, http://ulululu.hawaii.edu, and found a number of moments in our Hawaii history that I would never have been able to see before. Take a look at this political goodie, it’s a roundtable discussion with the candidates for the U.S. House 1st Congressional District special election to replace US Rep. Cecil Heftel for the remainder of his term in 1986. You’ll recognize Hawaii politicians Democrat Steve Cobb, Republican Patricia Saiki, Democrat Mufi Hannemann, and Democrat Neil Abercrombie. This is the election that took Abercrombie to Congress.

The website is part of ‘Ulu‘ulu: The Henry Ku‘ualoha Giugni Moving Image Archive of Hawai‘i at UH West Oahu. Its mission is to “perpetuate and share the rich moving image heritage of Hawai‘i through the preservation of film and videotape related to the history and culture of Native Hawaiians and the people of Hawai‘i.”

At “The Archive,” they collect donated moving images related to Hawaii and its history from local businesses, organizations, and individuals, and staff work to catalog, preserve, and give the public access to these historic items.

The videos online are just a few of the 17,000 videos, including 500 films, that “The Archive” holds. Because of copyright you won’t be able to watch the entire videos online, but you can view 10% of each video. If you find something that you are interesting in learning more about, the website instructs you to contact them or the original owners of the copyrighted material.

Wai'anae Access to Justice Meeting
Posted by Thelma at 3:23 PM No comments:

Each year the creative elves in the House Chief Clerk's Office put on display a themed Christmas tree for everyone to enjoy. This year they're going big. World Wide Web big. The elves want their Christmas tree to go viral. Let's help them out! 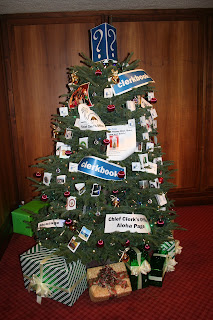 Go down to the parlor area of the House Chief Clerk's office in the Chamber and help our friendly elves make their Facebook-themed Christmas tree (Mr. Tree from here on out) go viral by signing your name on a "like" ornament and hanging it on Mr. Tree.

Also, check in with Mr. Tree throughout the week as he may just have a new status update to share with everyone. (You'll find the timeline of status updates near the "like" ornaments on the table)

This was yesterday's update. Mr. Tree sure looked thirsty. 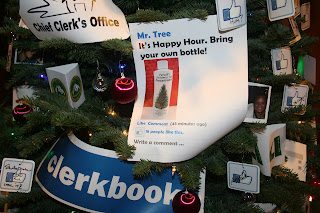 And this is today's status update from Mr. Tree. 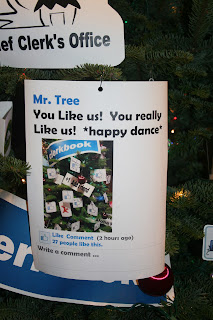 We at the House of Representatives are so lucky to have our friendly elves in the Chief Clerk's Office who every year put up an amazing tree for all of us to enjoy. The word in elf town is that Neal was responsible for getting the perfect tree, and that Denise and Tammy came up with the theme and decorations. Show your mahalo by liking Mr. Tree in person or on the House of Representatives Facebook page!
Posted by Thelma at 4:12 PM No comments:

WHAT:            Newly elected State Representative Richard Onishi (District 3 – South Hilo, Keaau, Honuapo) will host Input Sessions for community members to share their ideas and concerns about the district as well as their priorities for the 2013 Legislative Session. Info: 808-586-6120