Hawaii's 19th Annual Children and Youth Day celebration is scheduled this year for Sunday, October 7, 2012 from 10 a.m. to 3 p.m. at the State Capitol. It's a free event featuring more than 300 fun, interactive and educational activities for the whole family. Mark your calendars for a day of nonstop entertainment, ono grinds, and games and rides for the kids. For more information, visit the event's official website, like HawaiiCYD on Facebook, and follow HawaiiCYD on Twitter. If you would like to volunteer as an individual or with a group or organization, sign up here.
2012 CYD Poster
Posted by Thelma at 3:18 PM No comments:

Email ThisBlogThis!Share to TwitterShare to FacebookShare to Pinterest
topics: Children and Youth Month

The Anchorage Daily News published an article Monday about Alaska’s pursuit of Hawaii as a natural gas customer. Hawaii is already working to decrease its dependency on petroleum by tapping into renewable energy sources, including wind, solar, and biofuel power. Will Hawaii be importing gas from Alaska? Doesn’t look like it will happen anytime soon, but it is an energy alternative that both state governments are looking at. Read more here.
Posted by Thelma at 5:21 PM No comments:

Our very own Kevin Kuroda was honored this week for his work as the Sergeant-at-Arms for the House of Representatives. He received the 2012 Legislative Staff Achievement Award from the professional organization National Legislative Services and Security Association (NLSSA), affiliated with the National Conference of State Legislatures (NCSL).

Kevin has been with the House of Representatives for nearly 16 years. Prior to becoming the Sergeant-at-Arms in 2003, he was the chief clerk for the House Finance Committee. Kevin has been a member of the NLSSA since 2003 and has held the position of chair of region one, which is comprised of western states, and, most recently, as treasurer of the executive committee.

"I am honored and humbled to be recognized by my peers through this award from the NCSL and NLSAA," said Kevin, "but we wouldn’t be able to provide the necessary services and a safe and orderly working environment at the Hawaii House of Representatives without the help of staff members at the House Sergeant-at-Arms. They’re very much a part of helping make our institution function effectively and professionally."

Also this week, the Hawaii State Legislature received the Online Democracy Award at the NCSL's 2012 Legislative Summit in Chicago for having the top legislative website in the nation that makes democracy user-friendly.

The website was redesigned last year and includes a guide for first-time users, feature explanations, citizens’ guide, legislative glossary, and easy and accessible links, such as “Submit online testimony” and “Find your legislator” buttons. The panel of judges also noted the website’s easy-to-use layout, with frequently-used items in the center, search functions on the left, and navigation tools on the right.

In a press release sent out by the NCSL, Speaker Calvin Say is quoted saying, “As a state comprised of islands, access to legislative information online is critical, and encourages greater participation by the public in the legislative process. We are so proud of our team in being recognized through the Online Democracy award.  Their excellent work in redesigning the website promotes greater openness and transparency.   With rapid changes in technology, we understand that people are constantly seeking information in new ways, and this website has now become an invaluable tool for lawmakers, staff, the media and citizens of all ages."
Posted by Thelma at 1:03 PM No comments:

Hallelujah!  I have been looking for an old newspaper column, a satire piece on the legislature, for several years, and I think I'm finally close.  I had narrowed down the time frame, sometime between 1988 and 1992, and I was pretty sure I read it in The Honolulu Advertiser.  I reached out to several writers who I thought may have written it, and to other old timers who may remember the piece too, with no luck.

So, this morning, I went down to the Legislative Reference Bureau Library, and the helpful staff there immediately pulled out a file of clippings on the legislature from that time period.  What a great resource they are - and the stories immediately brought me back to the news of the day.  Speaker Joe talking about his office being bugged, former Senator Richard Matsuura and the wiretapping investigation, Pat Mau Shimizu was hired as Chief Clerk, and more!  But, I digress.

I came across three pieces that look like they are part of a wonderful series of columns by William Kresnak, then Capitol Bureau Chief for the Advertiser.  I am almost positive that the piece I'm looking for is part of his series.  They have the same humor and tone of the piece I am still trying to find.  Bill is now living on the mainland and is the Government Affairs Editor of "American Motorcyclist" magazine.  I'll be posting the ones I have found periodically and others if I find more.  It sure seems like not much has really changed in the past 22 years.  According to Bill, this was a popular one, dated 3-12-90: 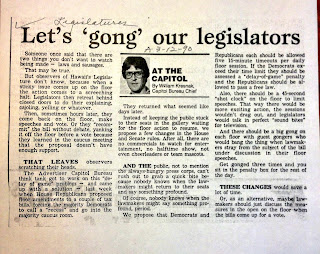 Someone once said that there are two things you don't want to watch being made -- laws and sausages.

That may be true.

But observers of Hawaii's Legislature don't know, because when a sticky issue comes up on the floor the action comes to a screeching halt.  Legislators then retreat behind closed doors to do their explaining, cajoling, yelling or whatever.

Then, sometimes hours later, they come back on the floor, make speeches and vote.  Or they "recommit" the bill without debate, yanking it off the floor before a vote because they learned in the caucus meeting that the proposal doesn't have support.

THAT LEAVES observers scratching their heads.

The Advertiser Capitol Bureau think tank got to work on this "delay of game" problem -- and came up with a solution -- last week when the House Republicans proposed floor amendments to a couple of tax bills, forcing the majority Democrats to call a "recess" and go into the majority caucus room.

Instead of keeping the public stuck to their seats in the gallery waiting for the floor action to resume, we propose a few changes in the House and Senate rules.  After all, there are no commercials to watch for entertainment, no halftime show, not even cheerleaders or team mascots.

AND THE public, not to mention the always-hungry press corps, can't rush out to grab a quick bite because nobody knows when the lawmakers might return to their seats and say something profound.

Of course, nobody knows when the lawmakers might say something profound, period.

Also, there should be a 45-second "shot clock" on the floor to limit speeches.  That way there would be more exciting action, the sessions wouldn't drag out, and legislators would talk in perfect "sound bites" for television.

And there should be a big gong on each floor with guest gongers who would bang the thing when lawmakers stray from the subject of the bill under discussion in their floor speeches.

Get gonged three times and you sit in the penalty box for the rest of the day.

THESE CHANGES would save a lot of time.

Or, as an alternative, maybe lawmakers should just discuss the measures in the open on the floor when the bills come up for a vote.
Posted by James Gonser at 12:29 PM No comments:

On the next episode of Kukui Connection, Rep. Marilyn Lee talks with Coral Andrews (left), executive director of the Hawaii Health Connector, a state-based health insurance exchange. Andrews will discuss the Hawaii Health Connector and what it will do for healthcare in Hawaii, the timeline of establishing the Connector before the Jan. 1, 2012 launch date, and how you can get more information throughout its development.

In July 2011, Governor Neil Abercrombie signed into law a measure outlining the establishment of a health insurance exchange, which is mandated by the federal government’s Affordable Care Act.  A health insurance exchange is an electronic marketplace where uninsured people can compare and purchase health insurance and receive federal subsidies for the cost. Andrews likens it to the buying of airline tickets on travel aggregator websites such as Kayak.com.

Hawaii was the first state to declare its intent on developing a health insurance exchange, and most recently, has  issued a request for proposals for construction of the online marketplace.

Learn more about Coral Andrews and the Hawaii Health Connector by watching the Kukui Connection on the following air dates on Oceanic 'Olelo Channel 54:

You can also learn more now by visiting www.hawaiihealthconnector.com.
Posted by Thelma at 1:54 PM No comments:

"Dedicated to education, but not precious about it"

That's how education leader, Dr. Paul Kelley, described his impression of Rep. Roy Takumi, Chairman of the Hawaii House Committee on Education.  They attended a conference together and ended up being at the same round table discussion on education and school hours.

Rep. Takumi was challenging the notion that schools require a certain number of hours of classtime, or "seat time" as some prefer to say, without any regard for the achievement of success.  If students achieve the academic goal in 30 hours instead of a standard 300 hours, "shouldn't we be focusing on the success and not trying to make students achieve in a certain way?" said Takumi.

After listening to the speaker and understanding his direction, Dr. Kelley was surprised to find out that the person behind the name tag was not an educator, but a politician.

Dr. Paul Kelley, according to his bio, is one of the U.K.'s best known education innovators.  Read more of Kelley's "Making Minds" blog post on Rep. Takumi.
Posted by James Gonser at 9:53 AM No comments:


Posted by James Gonser at 1:32 PM No comments: