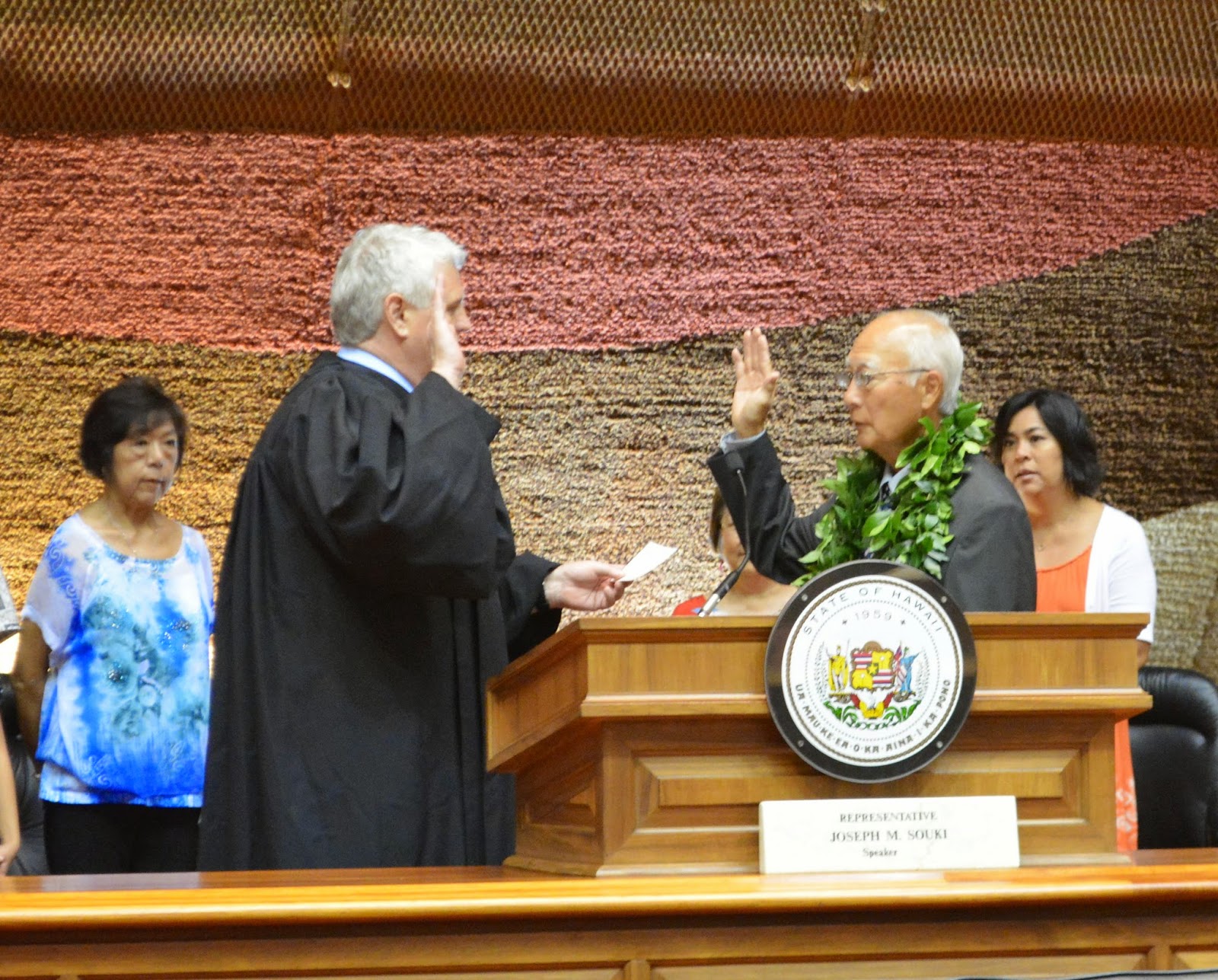 George Okuda was officially sworn in today as a member of the Hawaii House of Representatives by Chief Justice Mark E. Recktenwald. Okuda was appointed by Governor Abercrombie to represent House District 48 (Kaneohe, Heeia, Ahuimanu, Kahaluu, Haiku Valley, Mokuoole) previously held by Representative Jessica Wooley who was appointed Director of the Department of Health's Office of Environmental Quality Control.

Okuda will serve out Wooley’s term until a new member is elected in the November general election.

"I want to thank Governor Abercrombie and Speaker Souki for having the confidence in me to carry out the duties of the office. I look forward to working with them along with those in the community to fulfill the responsibilities of my position,” said Okuda. “During the next few months I will be focusing on addressing the concerns and issues of the residents in the 48th district.”

House Speaker Joseph M. Souki said, “George is familiar with the Legislature and the issues of the Windward area and will serve the community well as its representative in the months ahead. He has been involved in managing legislation and working with various constituents, community groups, and state officials including with school principals to attain much needed capital improvement funding at schools in the windward district.”

Okuda served as an aide to Representative Ken Ito (Kaneohe, Maunawili, Olomana) since 2000. Prior to that he worked for former State Senator Bob Nakata (Kaneohe , Kaaawa, Hauula, Laie, Kahuku, Waialua, Haleiwa, Wahiawa, Schofield Barracks, Kunia). He has been a resident of Kahaluu since 1973, and served on the Kahaluu Neighborhood Board for six years including two as its Chair.

Okuda earned a Bachelor of Science degree in engineering from the University of Hawaii at Manoa and is a licensed civil and structural engineer who previously worked for Hawaiian Electric Company.
Posted by Unknown at 2:56 PM No comments:

The law creates a five-year subsidy program under the Department of Agriculture (DOA) to grant subsidies for coffee farmers to assist in offsetting the costs of combating the coffee berry borer beetle. The law also includes $500,000 in funding for the program.

“Subsidy programs like this have helped in other coffee-growing regions to provide an incentive for farmers to adopt best practices, and I’m hopeful that it will do the same in Kona. Direct assistance from the State is critical for our coffee farmers, and this bill accomplishes that,” said Rep. Lowen.

Under the program, a single coffee farmer may receive reimbursement for the expense of the organic fungus used to control the pest of up to $600 per year per acre of land in coffee production, but not more than $9,000 per year. The legislation will go into effect on July 1, 2014.

In recent years the coffee berry borer beetle has become a major threat to Hawaii's coffee industry, which is responsible for $30 million in revenue annually. Past efforts by Representative Lowen have provided additional funds of $800,000 funds to help mitigate and study the infestation. This program will further help protect and maintain Hawaii’s coffee industry. 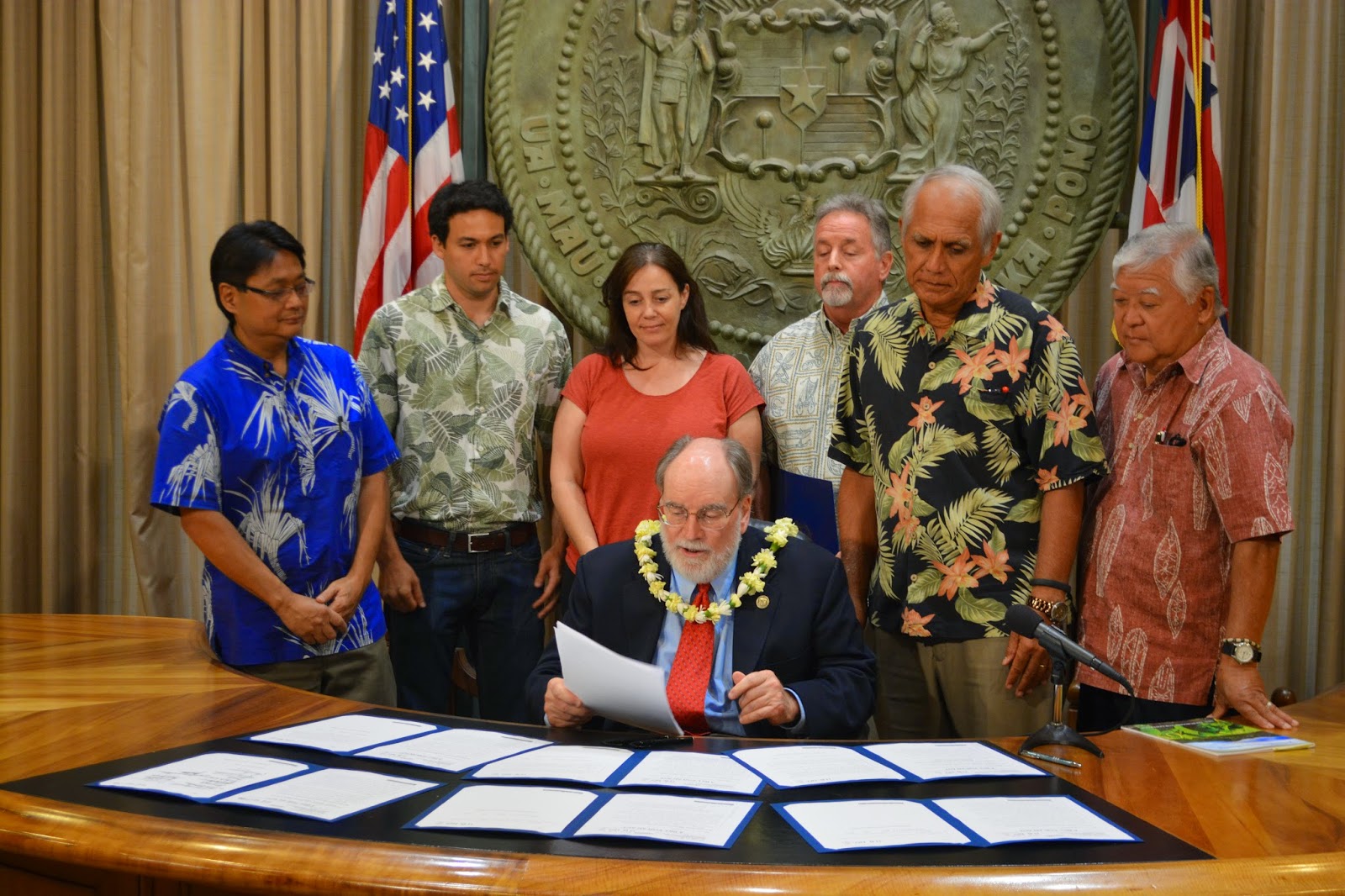 Also signed into law today were 5 other agriculture-related measures including: 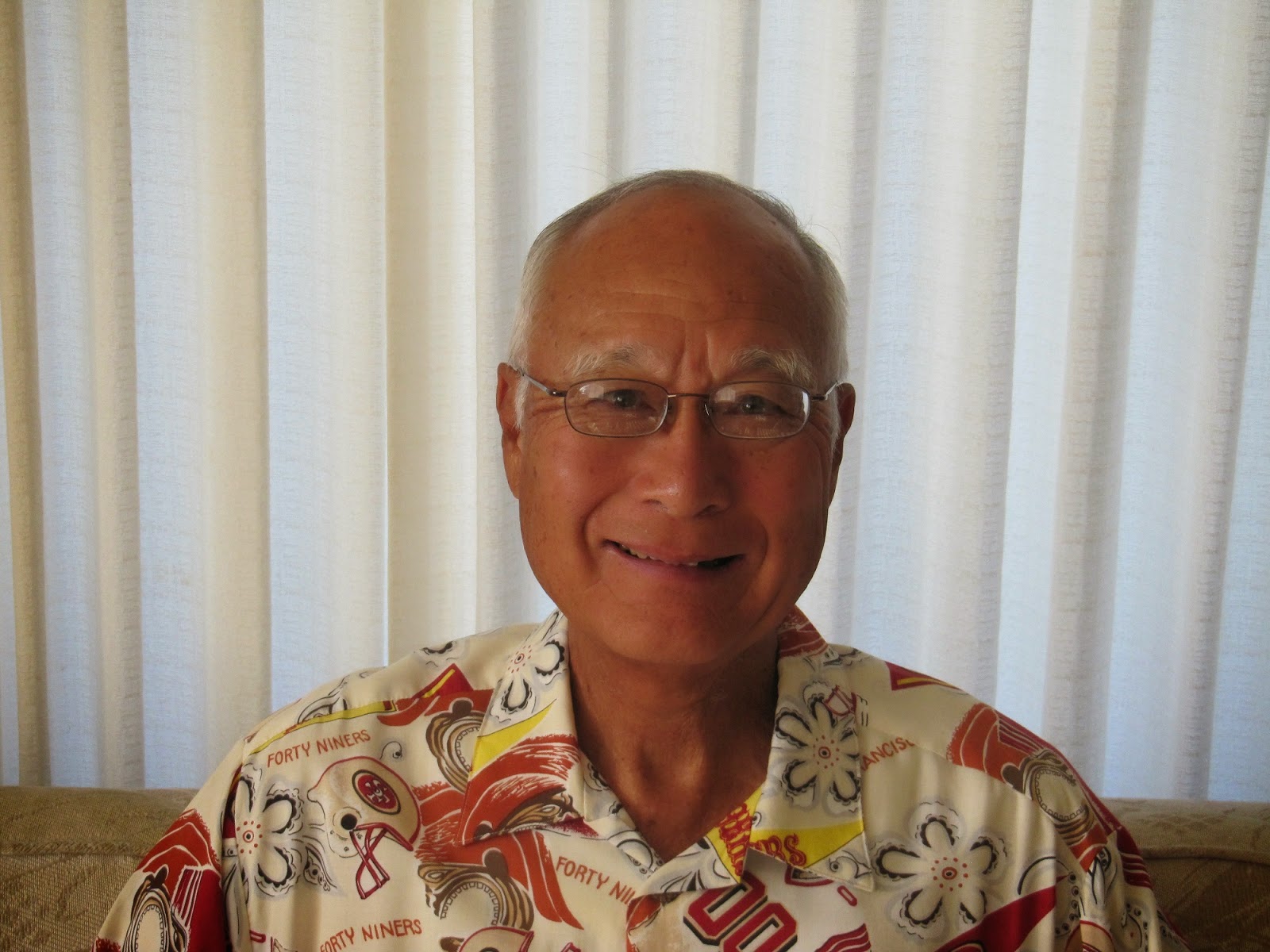 Governor Abercrombie this morning announced the appointment of George Okuda to the vacant District 48 State House of Representatives seat.

The position was left vacant after the appointment of former Rep. Jessica Wooley as Director of the Environmental Quality Control last month.

Okuda has served as a legislative aide for state Rep. Ken Ito since 2000, drafting, tracking and analyzing bills and resolutions. He was also responsible for meeting and working with various state department personnel, organizations and constituents on measures before the Legislature. In addition, Okuda worked with school principals in Rep. Ito’s district on capital improvement projects needed at schools. In prior years, he served as a legislative aide for state Sen. Bob Nakata. Okuda was also a member of the Kahaluu Neighborhood Board for six years, two as chair.

Okuda is licensed civil and structural engineer and previously worked for the Hawaiian Electric Company. A resident of Kahaluu since 1973, he earned a Bachelor of Science degree in engineering from the University of Hawaii at Manoa.

(Photo & Bio courtesy of Governor's Office)
Posted by Unknown at 1:20 PM No comments:

The state has taken an important step forward towards protecting the public and addressing the impacts of climate change in Hawaii. Signed into law today by Governor Abercrombie, House Bill 1714 will address climate change adaptation in the state by establishing an interagency climate adaptation committee under the Department of Land and Natural Resources (DLNR) to develop a sea level rise vulnerability and adaptation report that addresses sea level rise impacts statewide to 2050.

"We have a chance to change our future," said Representative Chris Lee (Kailua, Waimanalo) the bill’s introducer and Chair of the House Committee on Energy & Environmental Protection. "Planning ahead now will save billions of dollars for our next generation and it will make us secure, safe and give our next generation of children an opportunity to much of the same Hawaii that we have today.”

"I applaud my colleagues in the Legislature and the Governor for making it a priority to tackle the consequences of climate change on our islands. We have seen rising sea levels, erosion of our shoreline, and various other effects of global warming on the increase in the last year,” added Majority Policy Leader Representative Henry Aquino (Waipahu). “The Hawaii Climate Adaptation Initiative will help protect our economy and way of life for our next generation.”

House Bill 1714 was one of the measures included in the 2014 Joint Majority Legislative Package. The significance of a joint package is that the included bills are considered to have statewide importance and the commitment of the majorities of both chambers of the legislature.
Posted by Unknown at 9:59 AM No comments: