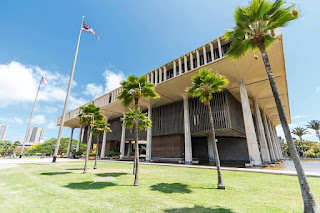 Crossover is the deadline by which a final vote must be taken in the bill's originating house to pass the bill on third reading, enabling it to cross over to the non-originating house for consideration.
The House today passed 169 third reading bills including:
Campaign Spending
HB1382 HD2  Prohibits campaign fundraising on the property of any person who has accepted legislatively appropriated funds that exceed an as-yet unspecified value or received or rendered services to the State.

Voter Registration
HB1217 HD1  Requires that all people who apply for a driver's license or identification card complete a voter registration application, and automatically registers each qualified applicant for voting unless the applicant affirmatively declines to register to vote.

Outside Employment or Emoluments
HB361 HD1  Prohibits the Governor or any county mayor, while holding those offices, to maintain any other employment or receive any emolument, beginning on the sixty-first calendar day after their election or appointment to office.

Public Records – Police Officers
HB285 HD1  Requires county police departments to allow public access to information about suspended officers and to disclose the identity of officers who are suspended or discharged to the Legislature.

Nondisclosure Agreements for Sexual Misconduct in the Workplace
HB488 HD2  Prohibits an employer from requiring an employee, as a condition of employment, to enter into a nondisclosure agreement that prevents the employee from disclosing sexual harassment or sexual assault occurring in the workplace, at work-related events, between employees, or between an employer and employee. Allows for confidentiality only at the employee's request or if the employee agrees to a confidential settlement.

Water Rights
HB1326 HD2  Extends revocable water rights permits to allow for ten consecutive one-year holdovers of water permits, and requires the automatic continuation of water permits while contested cases are pending until the completion of the proceedings.

Fireworks
HB89 HD2  Holds property owners or renters criminally liable for the possession or explosion of aerial devices on their property, and allows police to use witness accounts, photographs, video or other recordings as probable cause for arrest.

HB497 HD1  Establishes a task force to examine the illegal import of fireworks and contraband into Hawaiʻi.

Landlord-Tenant Code
HB931 HD2  Prohibits a landlord from evicting a tenant if the landlord fails to maintain the habitability of the premises and the tenant continues to pay fair-market value of the rent. Caps a tenant's rent at the fair-market value if the habitability of the premises is significantly impaired. Allows tenants who are wrongfully removed to recover two months' rent or two months' free occupancy. Allows landlords to recover possession of the premises once it is restored to a habitable condition and upon termination of the rental agreement.

Civil Asset Forfeiture
HB748 HD2  Prohibits civil asset forfeiture unless the owner is convicted of a felony. Requires that half of all forfeited property is distributed to the Hawaiʻi Law Enforcement Assisted Diversion Program and half to the general fund.

Natural Disaster Mutual Assistance Agreement
HB1305 HD2  In the case of a natural disaster or emergency, authorizes State electric and gas utilities to enter into a mutual assistance agreement with out-of-state utilities to assist in the restoration of the State's electrical or natural gas power.

Rapid Transportation Authority
HB118 HD1  So as not to conflict with federal proceedings, repeals the requirement that the Auditor conduct an annual review of certain rapid transportation authorities in the State.

Click here for a list of all 497 bills passed by the House of Representative so far this session.
Posted by James Gonser at 1:31 PM