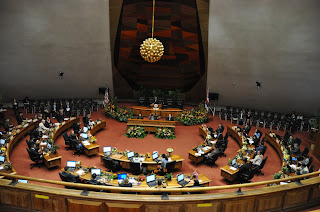 Honolulu, Hawaiʻi – The House of Representatives passed 197 bills on third reading today, moving them to the Senate for their consideration. The bills include measures on election reform, climate change and the environment, minimum wage, education, public safety, crime, taxes, and other important issues.

Here are some of today's highlights:

HB709 HD1  Proposes an amendment to the Hawaiʻi State Constitution to allow the Legislature to enact laws regarding how recounts are conducted in an election.

HB428 HD1  Requires an automatic recount of votes cast for a candidate or on a ballot question when the difference in the number of votes is equal to or less than 100 votes or 0.5 percent, whichever is greater.

HB626  Requires that vacancies in the offices of United States Senator, State Senator, and State Representative to be filled by a special election.

HB1248 HD1  Requires voting by mail for all elections statewide by the 2020 primary election, and establishes a limited number of voter service centers to receive personal delivery of mail-in ballots and offer same-day registration and voting.

HB210 HD1  Provides ranked choice method of voting for all partisan primary elections, special elections, and nonpartisan general elections held in the state on or after January 1, 2020.

HB627 HD1  Amends campaign finance law by requiring that candidate committee reports include independent expenditures in support or opposition of a clearly identified candidate, that the Campaign Spending Commission notify candidates of independent expenditures and publish the information on its website, and that noncandidate committees disclose all contributors for advertisements.

Climate Change and the Environment

HB461 HD1  Requires the Hawaiʻi Climate Change Mitigation and Adaptation Commission to address the impacts of sea level rise by identifying critical public infrastructure in impacted areas, identifying priority areas that will be subject to high rates of coastal erosion, developing a sea level rise adaptation plan, and reporting to the Legislature before the 2021 Regular Session about how to move forward with concrete strategies for mitigation and adaptation.

HB1487 HD1  Establishes the Honolulu shoreline climate protection pilot project to develop a plan to protect urban Honolulu from the acute impacts of sea level rise, floodwater, storms, and other impacts of a rapidly changing climate.

HB1121 HD1  Requires the Commission on Water Resource Management to update the Hawaiʻi water plan by addressing issues including climate change and sea level rise to ensure protection and management of water resources.

HB588 HD1  Requires the State Sustainability Coordinator of the Office of Planning to complete a holistic and comprehensive study and plan for green infrastructure opportunities in the State.

HB96 HD1  Authorizes each county to establish a minimum wage that is a higher wage than the state minimum wage.

HB247 HD1  Appropriates funds for the Department of Education to install air conditioning in public schools that prioritize the project.

HB251 HD1  Appropriates funds for laptop or tablet computers to be used by teachers and students for digital teaching and learning.

Driving Under the Influence

HB 1264 HD1  Authorizes the court to decree a forfeiture of an employee's retirement benefits if the employee is convicted of a felony related to the performance of the employee's job.

HB508 HD1  Requires persons arrested for felony sexual offenses to provide a DNA sample, and provides for the destruction of DNA samples and expungement of a DNA database profile when appropriate.

HB456 HD2  Requires the Director of Public Safety to develop policies and procedures to govern the use of force, including training and equipment, by deputy sheriffs, and requires less-than-lethal use of force training.

HB1176 HD1  Authorizes law enforcement officers of the Department of Transportation to use electric guns while performing their duties, and requires the officers to be accredited by June 30, 2024, for the use of electric guns.

HB476 HD1  Appropriates funds into to the Rental Housing Revolving Fund for the construction of low-income housing.

HB1195 HD1  Establishes the Federal Furlough Loan Program to provide loans to eligible federal workers affected by the federal shutdown, and provides an emergency appropriation to carry out the purposes of the loan program.

HB334 HD1  Expands the eligibility for state-funded individual development accounts to include households with income up to 100 percent of the area median income, and expands the allowable uses of account funds to include rental housing, transportation, and small business development.

HB631 HD1  Authorizes each county to impose a surcharge on the transient accommodations tax, and repeals state distributions of the tax revenues to the counties.

HB18 HD1  Repeals statutory limitations on the time period in which a survivor of childhood sexual abuse may file suit.

The deadline for House bills to pass third reading in order to move to the Senate is March 7.

Click here for a list of all 328 bills passed by the House of Representative so far this session.
Posted by James Gonser at 3:53 PM