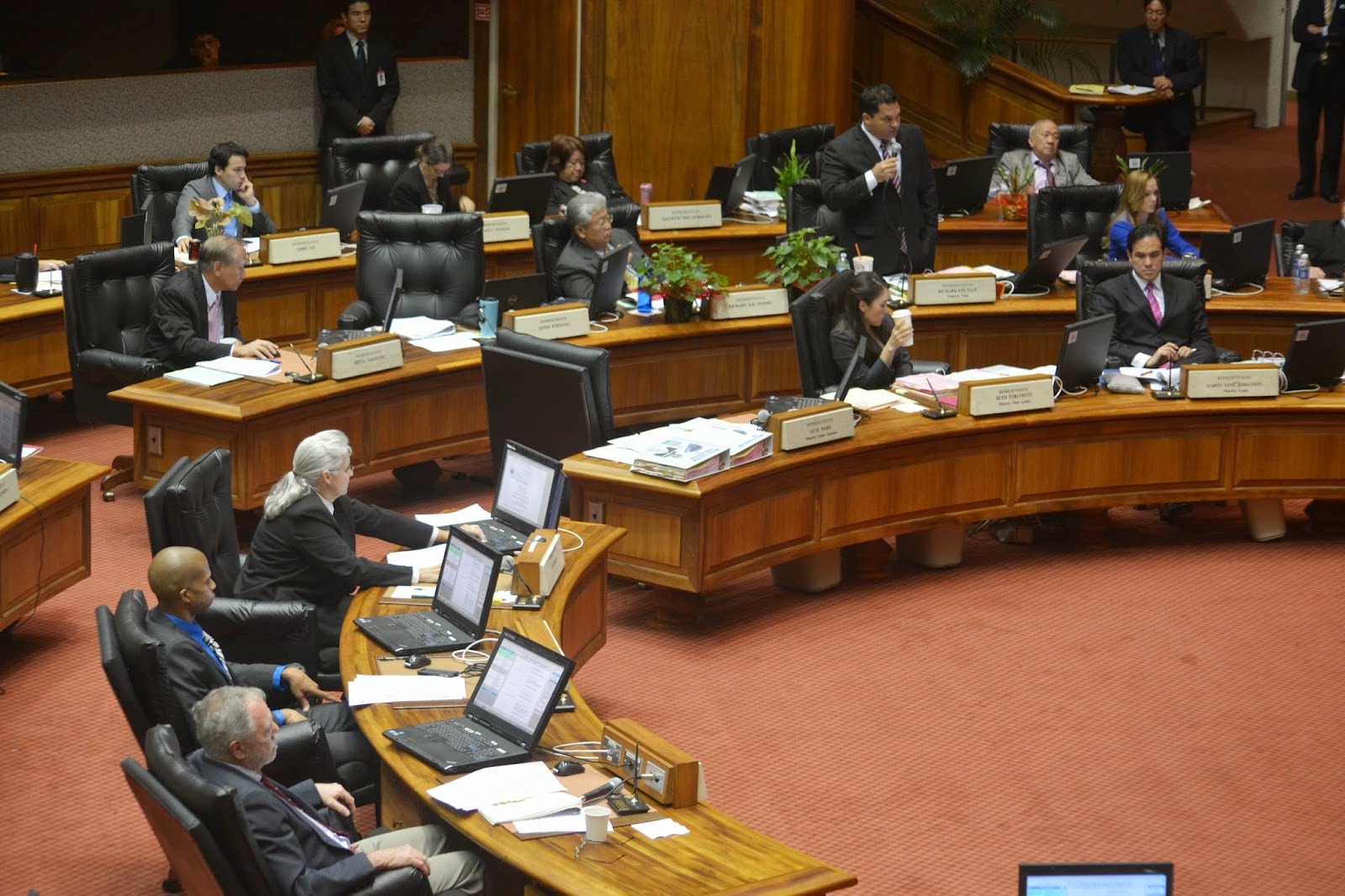 The House today passed over a hundred bills including measures relating to the University of Hawaii’s Cancer Center and the state’s request for a waiver from certain requirements of the Affordable Care Act (ACA).

Other bills passed by the House include measures that address invasive species and biosecurity in Hawaii; provide tax credits for cesspool upgrades, conversions and connections; provide funding for the development of “micro apartment” housing units, for a new prison on Oahu, and matching funds to purchase body cameras for police officers and to establish a Honolulu Police Department Body Camera Pilot Program. These bills now crossover to the Senate for its consideration.

Today marks the first decking deadline in the legislative process, when all measures must pass out of its final committee to be considered for a vote by the full House or Senate. Each chamber has until next Thursday, March 12, to vote on all remaining measures that have made it out of their respective committees. Some items still up for consideration next week include measures relating to medical marijuana dispensaries, the rail surcharge tax and private-public partnerships for Maui’s public hospitals.

The House will next convene in session on Tuesday, March 10, at 9 a.m.

Following next Thursday’s crossover deadline, the House will focus its attention on HB500, relating to the state budget, which must be passed out of the committee on Finance by March 16 and voted on by the full body by March 18.

A highlight of bills passed by the House today include:

HB544 requires the University of Hawaii Board of Regents to study the feasibility of selling or leasing the building that houses the UH Cancer Center.

HB576, HD 1 amends the scope of work of the State Innovation Waiver Task Force to assist it in developing a state innovation waiver in compliance with the federal Patient Protection and Affordable Care Act (ACA).

HB766, HD 1 makes an appropriation for the construction of micro apartment housing units to meet the increasing demand for housing that is affordable to low- and moderate-income households.

HB840, HD 1 directs the Director of Public Safety to prepare a request for proposals for the design, construction and operation of a community correctional facility on Oahu to ensure the continued safety of the public and better serve the inmate population of the state.

HB133, HD 1 provides an income tax credit for costs incurred in new hotel construction or renovation of an existing hotel facility to provide incentive for investments in tourism infrastructure.

HB365, HD 1 appropriates moneys as a grant-in-aid to the city and county of Honolulu to purchase body cameras for their police officers and to establish a Honolulu Police Department Body Camera Pilot Program, provided that the City and County of Honolulu provide matching funds on a one-to-one basis.

HB1040, HD1 requires the Hawaii Invasive Species Council to develop and contract with the University of Hawaii Economic Research Organization (UHERO) for an expanded economic model that establishes the impact of and the cost to mitigate the most significant invasive species in the state and appropriate funds for that contract.

HB1050 mandates the state Department of Agriculture and the Hawaii Invasive Species Council to perform specified tasks to address the interisland spread of invasive species that harms agriculture, native biota, public health and the economic well-being of the state.

HB1403, HD 1 requires the state Department of Agriculture to establish a little fire ant Pesticide Treatment Coupon Pilot Project and site map and to submit reports to the Legislature prior to the 2016 and 2017 Regular Sessions.

HB1140, HD 1 provides a temporary income tax credit for the cost of upgrading or converting a cesspool to a septic system or an aerobic treatment unit system, or connecting to a sewer system to protect public health, the quality of near-shore waters, and the state’s drinking water supply by reducing the number of cesspools throughout the state.

A complete list of bills passed by the House to date is available on the Capitol website at:
http://www.capitol.hawaii.gov/advreports/advreport.aspx?year=2015&report=deadline&active=true&rpt_type=firstCross&measuretype=HB&title=House%20Bills%20Crossed%20Over%20to%20the%20Senate