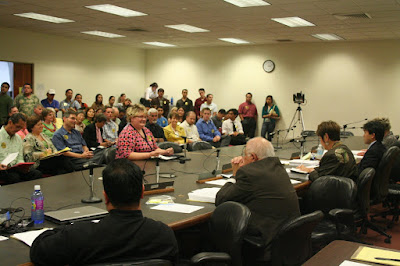 Photo: Laurie Cicotello, of Children of Lesbians and Gays Everywhere (COLAGE), testifies in support of the Civil Unions Bill, and relates to lawmakers her experience of being the daughter of a transgendered parent.

This evening, the House Judiciary Committee unanimously (12-0) passed out House Bill 444, relating to civil unions. Four committee members were excused. The issue was last heard in the 2007 legislative session, but failed to gain enough support to move forward.

The committee amended the bill by including those already registered as reciprocal beneficiaries as ineligible to receive civil union rights in Hawaii. People already in other civil unions or married are also excluded from eligibility.

“It is far from over, but this was a major step forward in advancing equality, understanding, and tolerance,” stated the bill’s sponsor, House Majority Leader Blake K. Oshiro (33 - Aiea, Halawa Valley, Halawa Heights, Aiea Heights).

“Today’s passage shows how much things have changed in just two years,” said Judiciary Committee Chair Jon Riki Karamatsu (41-Waipahu, Village Park, Waikele). The bill, having received a single committee referral will now go to the House floor for a full floor vote before crossing over to the Senate.

“We’ve got some great dialogue on this issue and a real chance at creating some equity within the law,” added Karamatsu.
Posted by Thelma at 6:50 PM

What is the rationale,if any, behind that amendment?

Many testifiers at the hearing questioned whether the law would allow reciprocal beneficiaries (RB)to be in a civil union. Just as RBs would be automatically terminated if one party gets married, it would be the same for a civil union. For example, I wouldn't be able to be in an RB with my uncle and have a civil union with someone else.

It was a technical amendment clarifying eligibility rules.

Problems could arise in medical cases and others situations if you could be in a civil union and RB. For example, a hospital would have to choose between the civil union partner and the RB partner to make decision on whether to take someone of life support. Things like that could put institutions in a bind.