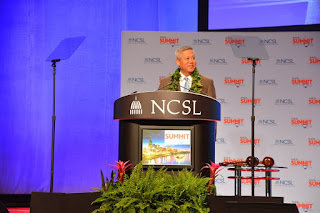 
Speaker Saiki, the current NCSL vice president, succeeds Speaker Robin Vos (R-WI.), Speaker of the Assembly from Wisconsin, who will become NCSL president. NCSL alternates leadership between the two parties each year. Saiki will be named NCSL president at the 2020 Legislative Summit.
“I appreciate the opportunity to serve as President-Elect and look forward to continued collaboration with my colleagues from around the country,” said Saiki. “NCSL has afforded legislators and staff an unrivaled opportunity to learn from the experiences of other states, exchange ideas and come up with policy solutions that can help propel our respective states and, ultimately, our entire nation forward. I look forward to continued work with our Washington office to ensure federal policies are in line with state priorities.”

Saiki has served as the speaker of the Hawai‘i House of Representatives since May 2017. He had previously served as majority leader. He has also been an active member of NCSL and served on the Task Force on State and Local Taxation as well as the NCSL Executive Committee.
"With almost twenty-five years of experience since his election to the House of Representatives in 1994, Speaker Saiki, with his vast institutional knowledge of the NCSL coupled with his strong organizational and leadership skills, will be a tremendous asset to the NCSL," said Hawai’i State Senate President Ronald D. Kouchi.  "In these divisive times, Speaker Saiki's election to preside over one of our nation's most respected bi-partisan legislative organizations speaks volumes about the inclusive nature of the State of Hawaii."
Saiki was born in Honolulu. He received his bachelor’s degree from the University of Hawaiʻi at Mānoa and his J.D. from the University of Hawai‘i's William S. Richardson School of Law.

Since 1975, NCSL has served as the bipartisan organization serving the legislators and staffs of the states, commonwealths and territories. It provides research, technical assistance and opportunities for policymakers to exchange ideas on the most pressing state issues and is an effective and respected advocate for the interests of the states in the American federal system.
Posted by James Gonser at 11:04 AM