House Bill 748 would allow asset forfeiture only after a criminal is convicted of a felony
Honolulu, Hawaiʻi – Lawmakers, concerned citizens and representatives from the American Civil Liberties Union, the Drug Policy Forum of Hawaiʻi and Young Progressives Demanding Action, gathered at the State Capitol today to ask Gov. David Ige to not veto House Bill 748 which prevents the seizing and selling of assets from a person arrested but not convicted of a crime. 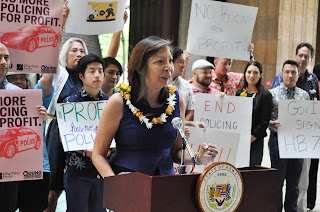 HB748 HD2 SD2 would require a criminal conviction before law enforcement could forfeit property, and any forfeiture revenue would be directed into the state's general fund, instead of into police and prosecutor's office budgets.
Under current civil asset forfeiture laws, police can seize property suspected of being connected to criminal activity, even if the owner is never charged with or convicted of a crime.
Rep. Joy A. San Buenaventura (Puna), who introduced of the bill, said an audit of the Attorney General's Forfeiture Program in 2017 showed there are no rules in place to return assets to a person not convicted of any crime.
"Assets from innocent people have been taken and sold for 35 years. It is time to change that," said Rep. San Buenaventura. "This bill will make sure that assets are only taken away from criminals, not innocent people."
Rep. Chris Lee (Kailua, Waimānalo) said allowing government agencies get a share of the funds from assets is a conflict of interest that cannot stand.

"Law enforcement agencies have publicly admitted they have a financial incentive to seize people's property in order to fund their own salaries and operations, which is unethical, unjust, and undermines public trust in law enforcement," said Rep. Lee.
Gov. Ige said when releasing his intent to veto list last month that there are safeguards in place that prevent the abuses cited in this bill.
Sen. Karl Rhoads (Dowsett Highlands, Pu‘unui, Nu‘uanu, Pacific Heights, Pauoa, Punchbowl, Palama, Liliha, Iwilei, Chinatown, and Downtown) said the bill does not prevent law enforcement from seizing assets.
"But law enforcement must wait for a felony conviction before they can sell off any seized assets," Rhoads said.
Eighteen other states already require criminal convictions before forfeitures can be initiated.
Posted by James Gonser at 2:34 PM