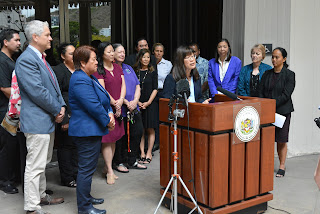 
Honolulu, Hawaiʻi – The Legislature has passed two important measures to help prevent suicide and to bring awareness to a disturbing increase in youth suicides in Hawaiʻi, especially on the neighbor islands.

HB330 HD1 SD1 CD1 appropriates $150,000 to the Department of Health to support youth suicide early intervention, prevention, and education initiatives in all counties focusing on youth between the ages of 10 through 24.

"It is critical that we bring awareness to suicide as a public health issue, and work to educate and support individuals, families, and communities in the state," said Representative Nadine K. Nakamura, vice chair of the Human Services & Homelessness Committee and introducer of HB330.

"Suicide was the leading cause of injury-related deaths for Hawaiʻi youth from 2013 to 2017. Suicide rates are higher among young people, especially from the neighbor islands and rural communities, and alarmingly high among Hawaiʻi's LGBTQ youth," said Rep. Nakamura (Hanalei, Princeville, Kīlauea, Anahola, Kapaʻa, Wailua).

Sen. Rosalyn H. Baker (South and West Maui), Chair of the Senate Committee on Commerce, Consumer Protection, and Health, said it is very important to give neighbor island communities the help they desperately need to prevent youth suicides.

"It can be difficult to seek help, and even more so if you live in a community that does not have adequate services to support mental health issues," said Senator Baker. "We must de-stigmatize conversations around mental health, and provide residents in all communities, and especially on neighbor islands and in rural areas, the health support services they need."

In 2017, the Task Force – in collaboration with the Emergency Medical Services and Injury Prevention System Branch – created a strategic plan to reduce suicide 25% by 2025. Among the key recommendations of the Task Force is to develop and implement a public awareness campaign. Designating September as “Suicide Prevention and Awareness Month” will play a key part in advancing this recommendation and raising greater awareness overall.

Task force member Pua Kaninau-Santos, who lost her son Kaniela to suicide in April 2003, said no one can imagine the pain of losing a family member to suicide, but she has learned that there is no one solution to solving the problem.

"We know so well that suicide is preventable and a lot of hard work by everyone here has brought us to this moment," said Kaninau-Santos. "I want to thank the Legislature for their support. Together we are going to try to save those lives crying out for help."

"To prevent suicide, we need to bring awareness to the problem and must allocate adequate resources to support education and early intervention," said Rep. Belatti (Makiki, Tantalus, Papakōlea, McCully, Pāwa‘a, Mānoa). "We know access to health care resources, including mental health services, can be significantly more challenging for residents on the neighbor islands than on Oʻahu. The Legislature is committed to providing funding to close this gap."

Both bills now advance to Governor Ige for approval or veto.

Contacts for anyone who may need help or support: