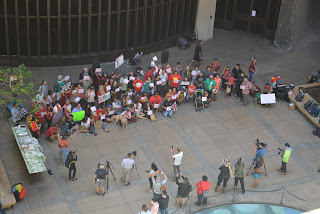 Residents rally at the State Capitol to ban dangerous pesticides.

Honolulu, Hawaiʻi –One of the major accomplishments of the 2018 Legislative session was the passing of Senate Bill 3095 SD1 HD1 CD1 which restricts pesticide use near schools, prohibits the use of the dangerous pesticides chlorpyrifos, and requires transparency and disclosure for the use of restricted-use pesticides in large quantities.
Governor David Ige is scheduled to sign the bill into law with several lawmakers attending in support.
House Majority Floor Leader, Representative Dee Morikawa (Niʻihau, Lehua, Kōloa, Waimea), said the bill is a common-sense solution for protecting our children and families from possible negative effects from chemical pesticides and the need for agricultural businesses to use some pesticides on their farms.

"Lawmakers made history by passing the first measure in the nation to ban the pesticide chlorpyrifos and to restrict the use of certain pesticides within 100 feet of schools," said Morikawa. "In Hawai‘i, children and families come first and this law says that we truly mean it."
Residents across the state have rallied in opposition to the use of dangerous pesticide, especially near schools. Exposure to pesticides can lead to developmental problems in children, and exposure to the pesticide chlorpyrifos has sent people to the hospital here in Hawai‘i.
Representative Richard P. Creagan said the pesticide chlorpyrifos has already been banned by many other nations but has not been prohibited by the U.S. Environmental Protection Agency.
"Becoming the first state to ban chlorpyrifos to protect public health sends a message to our residents that we will protect them and to other states that they need to step up and protect their residents," said Agriculture Committee Chair Creagan (Naʻālehu, Ocean View, Capt. Cook, Kealakekua, Kailua-Kona). "We cannot stand by and do nothing when the lives of our children are at risk."
Representative Chris Lee (Kailua, Waimānalo) said it is critical for residents to know where and when pesticides are being used.
"Without basic information about where and when dangerous pesticides are being sprayed into the air there is no way to confirm which chemicals are causing the illnesses and developmental problems in our communities. For more than a decade pesticide companies have fought against being required to disclose where and when their chemicals are being sprayed, but this bill ensures reporting of restricted pesticide use so any impacts can be determined." said Lee.
The law will:
1. Place a prohibition on use of pesticides within 100 feet of a school during instructional hours. "School" is defined as any public or private kindergarten, elementary, or secondary school, excluding home schools and "normal hours" are from 7 a.m. to 4 p.m.
2. Totally ban the pesticide chlorpyrifos effective Jan 1, 2019. The Department of Agriculture is authorized to issue exemptions through Dec. 31, 2022 to allow agricultural businesses time to adjust to the ban.
3. Provide a $300,000 appropriation from Pesticides Revolving Fund to effectuate the measure, including expenses for staffing, education, and outreach.
4. Provide a $300,000 appropriation from general revenues to develop a pesticide drift monitoring study to evaluate pesticide drift at three schools within the state.
5. Require commercial agricultural entities to regularly report their pesticide use.
Posted by James Gonser at 9:59 AM