Including $34.7 million for ‘Ohana Zones, medical services, and a coordinated
statewide initiative 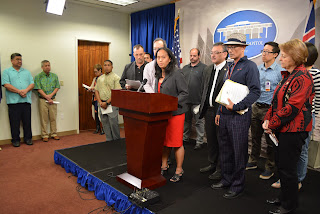 "The $30 million for ‘Ohana Zones is a lump sum that we hope to partner with the private sector using Kahauiki Village as a model," said House Majority Leader Belatti. "This amount is our estimate of what the infrastructure and support services will cost in multiple sites across the state. The idea here is to be very flexible. What might work on O‘ahu might not be the best plan for one of the neighbor islands."

Rep. Tom Brower (Waikīkī, Ala Moana) said the ‘Ohana Zones idea has been around for many years but will now become a reality.

"Ten years ago we started looking into safe zones for our homeless population," said Brower, Chair of the House Housing Committee. "Many were reluctant to go into shelters or even permanent housing. This will provide a better option for many homeless people."

“The measures we passed appropriate millions of dollars to help eliminate the homeless problem and build affordable rentals," said Senator Will Espero (‘Ewa Beach, Ocean Pointe, ‘Ewa by Gentry, Iroquois Point, portion of ‘Ewa Villages), Chair of the Senate Committee on Housing. "The Governor now has all the resources and tools necessary to provide housing and to assist the many homeless advocates and organizations with their programs and services that will help families and individuals rebuild their lives. This year’s funding is just the beginning of the Legislature’s commitment to end homeless,”

"This has been the most comprehensive year ever in funding homeless initiatives," said Mizuno, Chair Health & Human Services Committee. "We are focused on addressing our homeless crisis rather than funding more homeless sweeps. We have focused our policies to provide our people in need with stability, a place to heal, and the ability to become self-sufficient."
“Thousands of homeless who are struggling on our streets will see their lives change greatly for the better through this bill. The public will also see a difference when they have their parks back, their sidewalks clear, and see much less suffering throughout our communities,” said Senator Josh Green (Kona, Ka‘u), Chair of the Senate Committee on Human Services.
The total investment made by the Legislature to solve Hawai‘i's growing homeless crisis this session is about $50 million, an increase over the Governor's budget request.
Lawmakers last week provided $15 million to fund existing homeless service programs, $3 million more than requested by the Governor. The funds are in a lump sum rather than restricted to a specific program to allow the State Homeless Coordinator to have the ability take decisive action and use the funds where they are most needed.

They also appropriated $1 million for matching funds to the Hawaii Tourism Authority for homeless related projects. The nonprofit Hawaii Lodging and Tourism Association will distribute the money for programs in resort areas.

The bills now move to a final vote in both Houses.
Posted by James Gonser at 6:01 PM