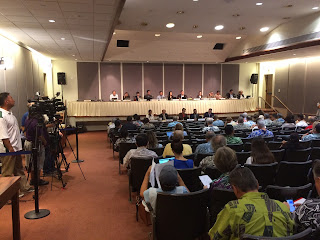 Honolulu, Hawaii – The House of Representatives committees on Transportation and Finance Wednesday passed SB4, a critical step in moving the bill forward to provide the funds needed to complete the City’s rail project.

Stakeholders and the public testified at the State Capitol today including City, State and HART officials before both committees voted to pass the bill. Transportation voted 4 to 2 in favor with one excused, and Finance voted 8 to 6 in favor of the bill with one excused.

The bill contains two funding mechanisms: a three-year extension of the 0.5 %  GET surcharge on Oahu and a 13-year 1% increase in the TAT statewide. This bill ensures that the City’s rail project will be sufficiently funded and reaches Ala Moana.

“This bill will provide enough money to fund the City’s rail project to Ala Moana and require the City to be transparent about how they are spending that taxpayer money,” Rep. Luke said.

The bill provides accountability by requiring a state-run audit and annual financial reviews of the rail project, and requires the State Comptroller to certify HART’s invoices for capital costs. The bill also requires the Senate President and the House Speaker to each appoint two non-voting, ex-officio members to the HART board of directors.

Transportation Committee Chair Henry Aquino said not depending solely on the GET to fund rail will save taxpayer money.

“By adding the hotel room tax to the mix, which provides and immediate cash flow to the project, we are saving taxpayers hundreds of millions of dollars that would be spend on financing fees,” Rep. Aquino said.

The bill now moves to the full House for a vote on second reading tomorrow.
Posted by James Gonser at 1:50 PM