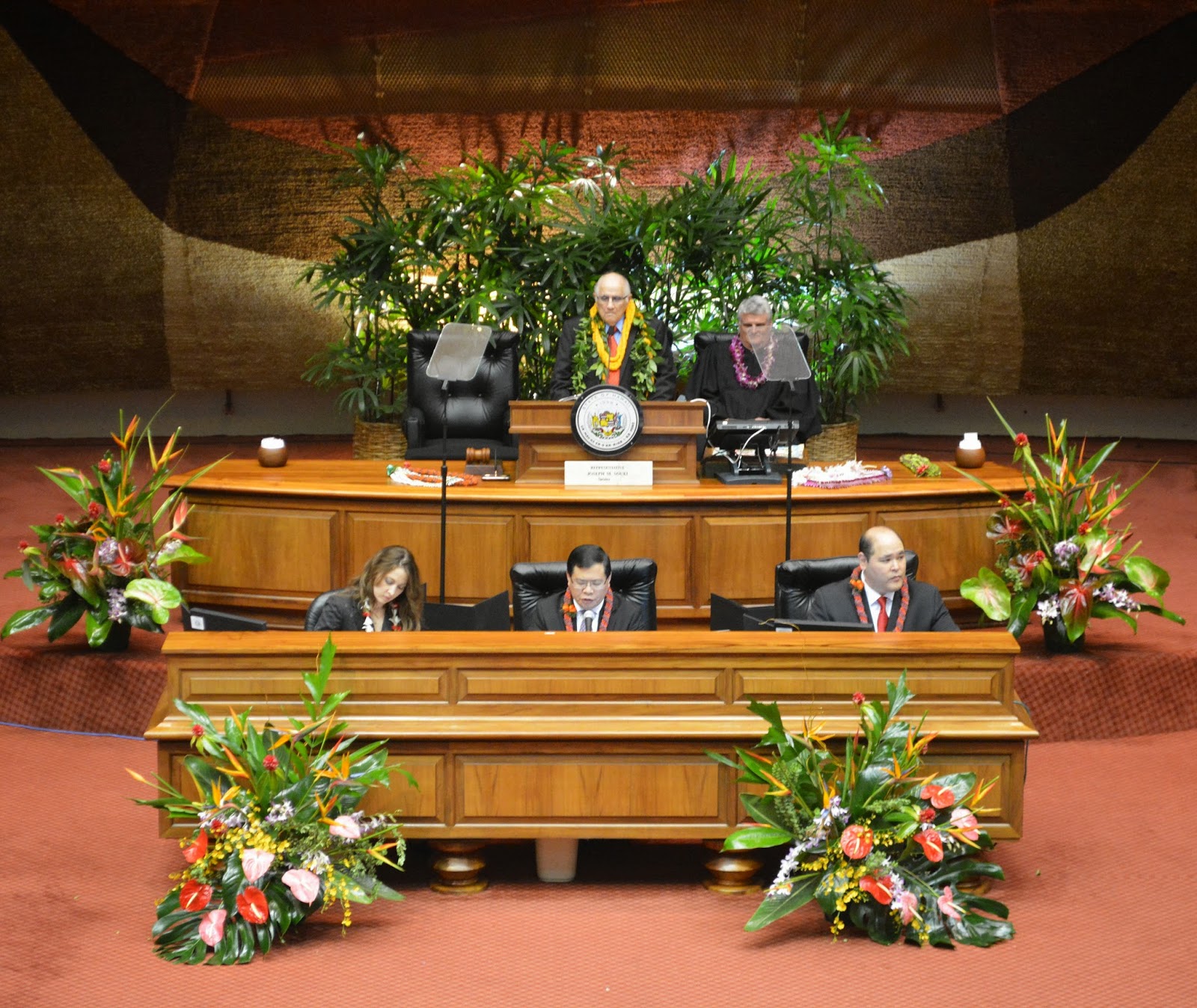 The 27th Hawaii State Legislature ended today with members from the House and the Senate joining in the singing of Hawaii Aloha. Before gaveling the session closed, House Speaker Joseph M. Souki acknowledged the work of everyone involved in the legislative process and summarized the session's accomplishments.

Here is the full text of his closing remarks:

We have come to the end of another legislative session.  To the leadership team, the Chairs, Vice Chairs, and each and every member of the House, thank you for your unwavering commitment to do your best for the people of Hawaii.

Because of you, this was not only a productive session but a biennium marked by significant accomplishments.

I would like to especially thank Majority Leader Scott Saiki, Vice Speaker John Mizuno and Finance Chair Sylvia Luke for their tremendous contributions and tireless efforts in moving us forward to this day.

To our Minority Leader Aaron Johanson and the Minority Caucus, thank you for bringing your ideas and perspective to the table to help us craft legislation for all of Hawaii's people.

To the permanent and session staff of the House, thank you for your professionalism and tireless efforts in supporting the work of the House.

I would also like to thank Senate President Donna Kim, her leadership team, the Senate Chairs and members who worked with us and collaborated as we worked to craft legislation for the people of Hawaii.

At the end of the day when all the talk is done, we can only take stock in the actions taken to assess what we’ve accomplished.

When the year started, our economy was on the rise, tourism was strong and unemployment was down. But long-term projections suggested the need for cautious optimism.

We needed to invest in current programs and projects, but we also had to make strong investments in Hawaii's future.

And you’ve done that, showing your ability to look beyond immediate needs, adjust to changing times, and exercise responsive legislation with vision.

Quality of life
At the same time, you saw the need to help our lowest wage earners by raising the minimum wage, for the first time since 2007.

You saw that a rising economy is a healthy one, only when it elevates all of our citizens.

And you saw the need to assist the homeless and those at risk of becoming homeless.

To that end, you increased funds allocated from the State’s conveyance tax to the Rental Housing Trust Fund from 30 to 50 percent starting July 1.

That will help our young families who are struggling to make ends meet with their housing needs.

You also moved quickly to shore up the Hawaii Health Connector that will preserve Hawaii’s Prepaid Health Care Act, thereby ensuring the future healthcare needs for all of Hawaii’s people.

In spite of being “given the ball on your own one-yard line,” you established greater oversight, created a better game plan, and restructured the Connector’s Board Directors to represent the broader interests of the community.

Under the Majority Package, you also reaffirmed our commitment to our kupuna, providing services and support programs for their health, safety and well-being.

And for others in need of help you provided more than $10 million in Grant-in-Aid for nonprofit organizations who reach out to the community with invaluable services.

The environment
You took measures to protect our environment and economy against invasive species and sought to plan for contingencies in the event of catastrophic consequences due to climate change.

You also took measures to secure a 665-acre conservation easement on Oahu’s north shore, which will protect those lands for future generations.

Education
Education at all levels is the bedrock upon which lifelong success hinges. Knowing this, you continued to invest in education, from preschool to higher learning. You made kindergarten mandatory for all five-year-olds and provided for children with special needs.

The economy
You also committed to strengthening our number one industry by raising the cap on the TAT.

As I noted in my opening day speech, the counties are equal partners in marketing our number one industry and should be provided with the necessary funds to do their job—certainly funds that we originally promised them.

Be that as it may, the increase is a start and we have an opportunity down the road to build upon this year’s actions.

In addition, you provided over $5 billion for a wide range of Capital Improvement Projects for state infrastructure, which will continue to support economic growth on all islands.

Included in those CIP funds are monies for the new Kona Judiciary Building and the University of Hawaii at Hilo School of Pharmacy.

Fiscal responsibility
During the past economic crisis, the State borrowed from the rainy day fund and the Hurricane Relief Fund, promising the money would be returned when the economy improved.

You began fulfilling that promise in the first year of the biennium and continued that process this session.  You also continued to address the state’s unfunded liabilities.

And finally, you responded to the voices of the people and moved quickly to restructure the Hawaii Community Development Authority that will help it create a better future for Kakaako and its residents.

Again, I am deeply grateful to all of you for your trust, your hard work and commitment to the people of Hawaii.

They say that pride is the result of accomplishments. That is why I take great pride in and am honored to have served as your Speaker, and I look forward to working with you in the foreseeable future.

Thank you and God bless.
Posted by Unknown at 2:25 PM