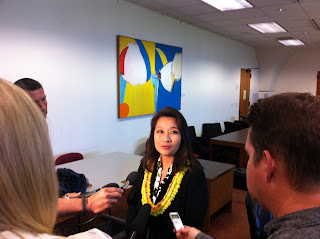 The Hawaii State Legislature today voted unanimously in both the House and Senate to approve the state budget for the upcoming FY2013-2015 biennium.

HB200 CD1 appropriates funds for operating and capital improvement costs of the Executive Branch for the biennium fiscal years FY2013-2014 and FY2014-2015.

House Finance Chair Sylvia Luke (Makiki, Punchbowl, Nuuanu, Dowsett Highlands, Pacific Heights, Pauoa) acknowledged that the fiscal outlook is looking positive but reiterated the importance of financial prudency, “our economy is recovering and while we have the money, it is now time to take a measured approach towards our State’s financial plan. This means passing a budget that takes care of our current needs, while also taking care of our financial obligations and reinvests in our future," said Luke. “In this budget, we kept our promise to recapitalize the Hurricane Relief Fund and Rainy Day Funds and we have taken significant steps towards reducing our unfunded liabilities.”

The financial plan includes an addition of $160 million into the Hurricane Relief Fund and $50 million into the Rainy Day Fund. Most importantly, it includes appropriations of $217 million in the next biennium to begin payments towards the State’s unfunded liability and will continue to allocate funds every year ending in an allocation of $500 million in FY2019.

"We used the projected surplus to strengthen economic drivers to ensure increased revenue returns.  To help the construction industry, the budget bill authorizes more than $1.3 billion in general obligation bond authorization for capital improvement projects statewide.  Additionally, to support our number one industry our financial plan includes an $11 million increase to the Hawaii Tourism Authority to strengthen the marketing of Hawaii as a visitor destination.  We also appropriated $6 million to assist our growing high technology industry in investment start ups and tax credits for research and development," said Luke.

Other funding highlights include:


Also approved today were the budgets for the Judiciary Branch and the Office of Hawaiian Affairs.

HB197 appropriates funds for operating and capital improvement costs of the Judicial Branch for the next biennium. The bill offers in general funding $145 million for FY2013-FY2014 and $144 million for FY2014-FY2015.

Watch a video of Chair Luke on Hawaii News Now Sunrise below: