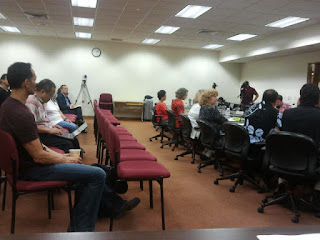 Mark Dacascos, the actor who plays the fictional villain Wo Fat on Hawaii Five-0, was spotted today at the Hawaii State Capitol with friend Chris Lee, film producer and founder of the University of Hawaii's Academy for Creative Media. Lee was part of a panel of experts discussing the film industry in Hawaii at a House informational briefing.

As Hawaii Five-0, The River, and other big productions begin filming on the islands, House lawmakers  continue to hold informational briefings to learn about what is being done to grow and nurture the industry as well as what needs to be improved and what kinds of legislation will be proposed during the upcoming legislative session. Today's meeting was the second in a series of briefings during the interim.

If you're unfamiliar with Act 88, the current law giving incentives and tax credits to production companies who film in the state, here's the basics. It is a refundable tax credit for qualified film, television, commercial, or digital media projects. The credit equals 15% of qualified production costs incurred on Oahu, and 20% on the neighbor islands. There is a $200, 000 minimum expenditure requirement and a maximum cap of $8 million in rebates.

It looks like the Creative Industries Division in the State Department of Business, Economic Development & Tourism will be proposing legislation to raise the tax credit for workforce development and seek capital improvement project funds for a studio. It was also mentioned that the law should not exclude internet-based productions from the tax credit.

Rep. Angus McKelvey suggested tailoring the tax credit to require post-production to be done in Hawaii.

The meeting ended with a discussion about connecting youth performing arts programs to college programs and local projects.
Posted by Thelma at 5:05 PM