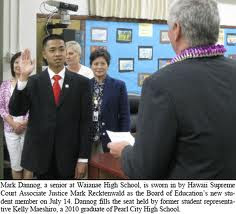 Air Date: Monday, August 1, 2011 at 1 p.m. - Olelo, ch. 54.
Repeat Date: Sunday, August 7, 2011 at 7:30 p.m. - Olelo ch. 54
Mark Dannog, who just graduated from Waianae High School, will probably be the only student member of the Board of Education to experience being on both an elected board and an appointed board. Hear his story on the next "Jordan's Journal" - a community based television series hosted by Rep. Jo Jordan.
Dannog, who was elected to the Board of Education as a student member on July 14, 2010, stayed on the Board after it transitioned to an appointed board and completed his term on June 30, 2011. Governor Abercrombie has since appointed a new student member. As he is the only person to sit on both appointed and elected boards, watch the show to find out which he prefers and why.
He believes that the student member may be one of the most important members on the board because the student is the only person on the board who is actually in the school system every day and can witness firsthand how the board's policies are being implemented. He also believes that most parents in the Waianae area are not involved with their children's education, and that the schools and students could perform at a greater level with more parent involvement.
Now that he has graduated from high school, Dannog plans to start college, and then serve time with the Air Force after college graduation. After he has fulfilled his military obligations, he plans to enroll in law school, and eventually to come back to Hawaii to serve his home state.
Rep. Jo Jordan (District 45 - Waianae, Makaha, Makua) will be hosting a Town Hall Meeting focusing on Education on Wednesday, August 17, 2011, 7:00 to 8:30 p.m. at the Waianae District Park Multi-purpose Room. For futher information call Rep. Jordan's office at 586-8460 or email her at repjordan@capitol.hawaii.gov.
Posted by James Gonser at 11:24 AM