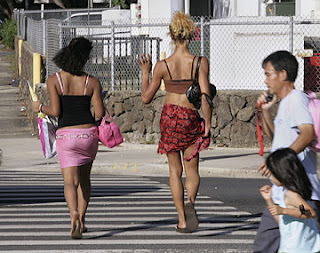 Legislature passes bills to help crack down on prostitution

Honolulu, Hawaii. The Hawaii State Legislature passed two significant bills in the 2011 session related to prostitution crimes. If the bills become law, both will be in effect when the Asia-Pacific Economic Cooperation (APEC) conference convenes in Honolulu in November 2011, at which time government, tourism, and law enforcement officials expect a surge in prostitution activity and sex trafficking; security will be heightened.

HB44, introduced by Rep. Karl Rhoads, makes it a misdemeanor to offer or agree to pay a fee to another person for the purpose of sexual conduct within 750 feet of a school or public park. If enacted, the law takes effect on July 1, 2011.

HB240 makes various amendments to the prostitution offenses currently on the books. The bill amends section 28-101 of the Hawaii Revised Statutes authorizing the attorney general to include prostitution cases as one of those considered "greatest priority" when determining the funding for and the provision of witness security and protection. It increases the offense of promoting prostitution in the first and second degree to a class A and B felony respectively. It expands the offense of prostitution and solicitation of prostitution to cover patrons. The measure makes the offense of habitual prostitution a class C felony, and applies the law and raises the penalty for those who habitually patronize prostitutes. The current law sunsets on June 30, 2012. If enacted, the new law takes effect on July 1, 2011 and makes the law permanent.

"Together, HB 44 and HB 240 raise the stakes for pimps, sex traffickers and customers of prostitutes while adding protections for the prostitutes themselves who wish to testify against those who coerced them into the sex trade," said Rep. Rhoads. "HB 44 raises the penalty for johns soliciting prostitutes close to schools and parks. Our keiki should not have to run a gauntlet of pimps and johns when they go to school or to the park.”

The bills provide law enforcement with stronger laws behind them to fight prostitution.