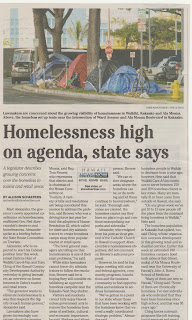 Representative Tom Brower, Chairman of the House Tourism Committee, recently held a informational briefing on Hawaii's homeless problem on the tourism industry. The Star Advertiser story about the meeting is here.

Below is Rep. Brower's thoughts on the meeting and issue:

When talking about tourism, the issue of homelessness must also be addressed. It is a growing problem in Hawaii's major tourist destinations, including Kakaako.

It's clear that Hawaii has several incentives for addressing its homeless problem: for residents, visitors, and the homeless.

Kakaako Waterfront Park has been the home of many kinds of homeless— newly arrived from cold weather states, local chronic homeless and CoFA migrants— and of many health/ public safety complaints from residents and visitors, who feel displaced by them and, as a result, avoid visiting one of the State's most popular parks.

HCDA's strategy is rooted in the new philosophy, "Hand up instead of hand out," and includes the following elements:

• Work Training: Homeless are trained to provide trash removal, janitorial and landscaping services, allowing the opportunity to learn job and people skills that will help them obtain future employment as well as to give back to their community. Mr. Ching notes that, for the first time, the park's bathrooms are cleaner than ever. He was impressed with their dedication.

• Matching: The homeless can receive a 50% match towards housing security deposit, enabling to move into their own home.

I urged Mr. Ching to consider safe zones as part of his multi-faceted approach.

Finally, I am grateful for all the attention on safe zones and the Kakaako homeless issue.

• A Sunday editorial was in favor of safe zones.

• In a previous story, the newspaper reported the increase of homeless in the Kakaako.
Posted by Thelma at 1:22 PM

Why is it that the homeless do not want to move into homeless shelters that were built for them? Is it because they do no want to adhere to the rules and regulations that they have to follow? Is it because they choose drugs and alcohol rather than succumb to societal expectations? Has there been a survey to determine what they want? Employment is the major reason; however, I believe there are other agendas in the minds of many homeless people. I have heard what legislators, committees, programs and other agencies that are putting forth incentives to help the homeless, but has anybody ever asked them "why?" and what is it that can happen for them to become productive? I think that they would like a say as to what will happen to them too. I don't condone homelessness, but they are human too.