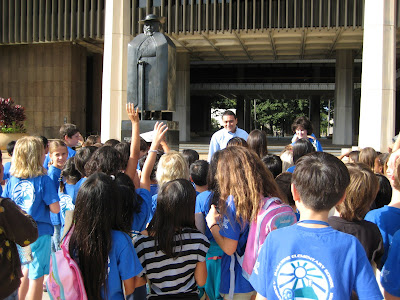 Rep. Mark Hashem and Hahaione School third graders
Rep. Mark Hashem hosted the third graders of Hahaione Elementary at the State Capitol on Thursday, February 17, 2011. In addition to learning about the building and points of interest, such as the Father Damien statue above, Rep. Hashem took them into the House chamber for a civics lesson.
To better understand the democratic process, Rep. Hashem explained how lawmakers vote on bills. As an example, he presented two different proposals:
Bill #1: A bill to make recess longer but would require staying longer at school in the afternoon.
Bill #2: A bill to make recess shorter but would allow them to go home sooner in the afternoon.
The two bills were put to a vote by show of hands. It was close, but the majority of students voted for bill #2.
Posted by James Gonser at 3:16 PM