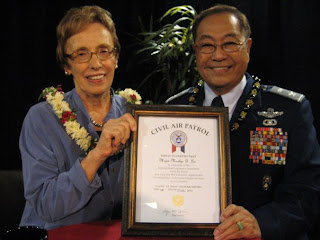 This Sunday, watch the latest episode of the Kukui Connection on the Hawaii Civil Air Patrol. Rep. Marilyn Lee talks with Colonel Stanley Y. Fernandez, the Director of Government Affairs. The show airs at 4 p.m., November 14th on Olelo Channel 54. It repeats on 11/28 and 12/12.

I previewed the show and was amazed at how little I knew about this important volunteer organization. For one thing, it is indeed all volunteer. The Civil Air Patrol's mission is three-fold: to provide emergency services, to operate a cadet program, and to conduct air space science research. They have nine airplanes that are used to warn the public of impending danger and to participate in search and rescue.

All of the 45 pilots are volunteer and come from civilian or military service backgrounds. Airplane maintenance and radio operations are conducted by volunteers as well. Training is critical and the Civil Air Patrol is in need of funding to provide more training as the organization has not received steady funding from the legislature since 1996.

Colonel Fernandez also presented Rep. Lee with a certificate inducting her into the Civil Air Patrol's Hawaii State Legislative Squadron. Rep. Lee now adds the rank of Major to her many accomplishments.
Posted by James Gonser at 10:53 AM