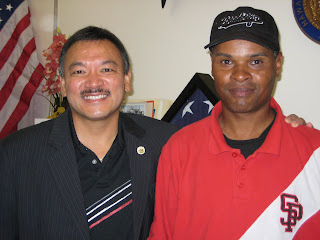 Rep. Mizuno and George Vonner
George Vonner came to Hawaii in early October expecting to live with a relative and find work. Once he was able to save some money, he planned to get his own place and ultimately bring his wife to the islands from California. When his living arrangements fell through, George found himself on the streets and homeless.
His wife, Charlene, works at a fast food establishment and could only afford to send $180 towards a plane ticket home. George knew that while he liked Hawaii, he didn't want to be homeless in Hawaii, and desperately wanted to go back to California where he could find work.

While waiting for help, he slept at a bus stop on a piece of cardboard in Iwilei. He got his meals and a place to shower from the Institute for Human Services and the River of Life.
A few weeks ago, he went to the State Library main branch on King Street to look for resources that might be able to help him. He walked over to the State Capitol where he was talking to a legislative staffer when Senator Brickwood Galuteria stopped to talk. Sen. Galuteria suggested he call Partners in Care.
Pam Menter with Partners in Care joined forces with Tisha Woytenko at Help the Hawaii Homeless, and together they reviewed George's case. Tisha said she knew that George was a good candidate to receive assistance for family reunification, and she called Rep. John Mizuno.
Rep. Mizuno agreed to donate $100 of his personal money toward a ticket, and Tisha was able to find a good rate with Alaska Airlines for $263. Together, the $180 from George's wife Charlene, and the $100 from Rep. Mizuno, they had enough money to send George home with a little left over for food while at the airport.
Rep. Mizuno, Pam Menter and Tisha Woytenko all believe that family reunification can work with the proper screening. George is the 5th person who has been helped through private donations and a ticket back home. He plans to pursue work as a court clerk or court officer as he has a degree in criminal justice. According to Tisha, she has 25 people on the list requesting assistance in going home.
A family reunification bill was introduced in the past two sessions, but neither passed. Rep. Mizuno has plans to re-introduce the bill in 2011.
Tonight, George will say goodbye to his friends and sleep at the same spot near the bus stop. Tisha will pick him up and take him to the airport early tomorrow morning to make sure he makes his 8 am flight.
Good luck and Aloha George!
Posted by James Gonser at 3:01 PM