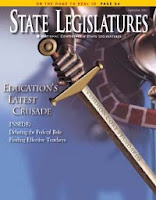 Rep. Roy Takumi, Chair of the House Education Committee, is at the forefront of the debate on Common Core Standards for our nation's public schools. In a recent article from the National Conference on State Legislatures, Takumi advocates for the adoption of standards. His position:

Hawaii Representative Roy Takumi points to the initiative’s decision to adopt core standards for K-12 mathematics as a step toward that goal. “There is not a whole lot of variation, in my opinion, between algebra one students. Yet we pride ourselves to a fault that the Mississippi version of the standards embedded in algebra one are more than they might have in Minnesota. That would be a laughable argument in South Korea or Japan or Chile.”

Takumi's position is part of a story in the current issue of State Legislatures magazine. Read the full story here. Not everyone agrees that core standards are the right direction for public education in America or that the international competition argument is persuasive. There is also the fear that the core standards will take away control over curriculum currently planned by the states. Takumi also doesn’t like the idea of the standards becoming a Washington-imposed set of requirements. “There is always the potential of the feds taking over anything, but I remain hopeful because, again, the people who have until now been behind this, such as the governors, are grounded in the states.

“States obviously should have the right to determine the educational destiny of their children,” he says. “But I would ask my colleagues and state legislators, again, to realize that we are one nation. We are competing against other nations. We are not competing against other states. That kind of thinking is a trap.”
Posted by James Gonser at 9:15 AM