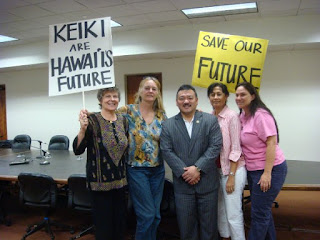 The House Committee on Human Services held a hearing for parents and child care providers who will be affected by the proposed reduction of preschool subsidies to share their concerns and suggestions with state lawmakers.

Most parents and child care providers were worried that their facilities would have to shut down because of fewer children who will be able enroll in February when the proposed subsidy programs goes into effect. More than 50 child care providers in the state may have to shut their doors because of the subsidy changes. Those opposed to the proposition wants the state to leave the Department of Human Services alone. They suggest cutting programs from other departments that will no affect Hawaii's most needy people.

Rep. John Mizuno, the chairman of the Human Services Committee, believes that the state is putting early childhood education at risk.