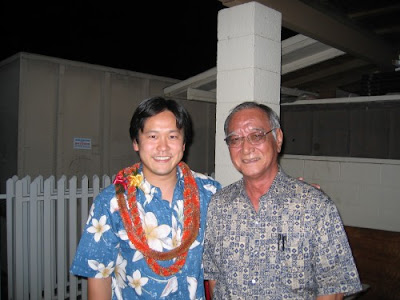 Rep. Jon Riki Karamatsu shared with me some of his personal experiences involving the spirit of the late Rep. Bob Nakasone. Rep. Nakasone, who represented Maui House District 9 – Kahului, Wailuku, Paia, passed away on December 7, 2008. His seat was filled by the appointment of Rep. Gil Keith-Agaran. Rep. Nakasone was regarded as a strong and influential leader of the House. He was considered one of the most knowledgeable legislators on Hawaii’s laws; he always did his homework and he had a respected institutional memory. He didn’t talk much, and he rarely consented to a media interview. He was also someone who understood the need for lawmakers to relieve stress, and the importance of everyone coming together socially even though you may disagree on the issues. His office was a gathering place, often lively, for friends to unwind and restore each other’s spirits.

December 12, 2008
After Rep. Nakasone passed away, many people at the Capitol mourned the loss, and Jon was feeling very sad for the entire week. On the night of December 12th, a Friday, Jon was working late at his capitol office when a friend and her daughter stopped by to visit around 9:15 p.m. They decided to walk over to Honolulu Hale and see the Christmas lights. On the ground level, they were walking down the capitol stairs near the Queen Liliuokalani statue when all of a sudden they heard very loud party noises. It sounded like a gathering of around a dozen people, laughing and talking, coming from the lanai area of Rep. Nakasone’s office. It was so loud that they looked up, the noise stopped, and it became completely silent. All the windows in the offices on the makai side of the building were dark. Jon asked his friend if she heard the noises too. She said she did, and that it sounded like Bob was back having a party. Just then, the sky opened up and they got drenched in a heavy downpour of rain. They ran back inside the capitol and didn’t go out to see the lights until later that night.

February 20, 2009
One of Jon’s friends, who shall remain anonymous, is sensitive to feeling the presence of spirits and sometimes even seeing them. On Thursday, February 19th, she mentioned to Jon that she was walking past Rep. Nakasone’s office (now Rep. Keith-Agaran’s office) and she felt his presence but did not see anything.
On February 20th, shortly after 12 noon, Rep. Karamatsu went up to the podium in the House Chamber and asked the members for a moment of silence in honor of the passing of Rep. Nakasone. Jon’s friend was watching the House proceedings on closed circuit television, and when she saw that Jon was asking for a moment of silence for Rep. Nakasone, she felt the urge to go back to Rep. Nakasone’s office to see if his presence was there.

Sure enough, as she walked toward the office in the narrow hallway, she saw Rep. Nakasone approaching her. They both stopped to talk. He said to her, “Jon listens to you, and that’s good.” Jon’s friend asked Bob, “Is Jon going to Hilo?” He replied, “Don’t worry, he’ll be in Hilo.” With that he continued walking past her, and she saw him fade as he walked away.
We’re not sure what the Hilo reference is about. There was a group of Big Island lawmakers who planned an event in Hilo the following day, Saturday. Rep. Karamatsu did not attend that event. However, he would later launch his neighbor island campaign for Lt. Governor in Hilo on Saturday, July 18, 2009.
Posted by James Gonser at 9:45 AM

Thank you for sharing these stories! It's comforting to know that he is still around not only in our hearts but as in spirit.