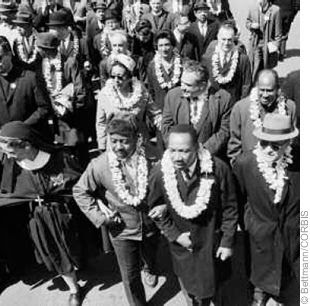 A photo of Dr. Martin Luther King on the historic freedom march from Selma to Montgomery, 1965. He and his supporters wore lei to symbolize peaceful intentions. Photo taken from Hawaiian Independence Blog.

Dr. Martin Luther King visited the newly formed Hawaii State Legislature on September 17, 1959. His remarks can be found in the House Journal from that year. The text has been retyped in full here.
The focus of his speech was on race relations, and where we were, as a nation. He includes his observations on Hawaii's accomplishments in this area.
Dr. King's speech reveals his work on and approach to solving the problems on racial disharmony, both nationally and internationally, in the decade prior to the turbulent 1960's.
Here are some excerpts:
"I come to you with a great deal of appreciation and great feeling of appreciation, I should say, for what has been accomplished in this beautiful setting and in this beautiful state of our Union. As I think of the struggle that we are engaged in in the South land, we look to you for inspiration and as a noble example, where you have already accomplished in the area of racial harmony and racial justice, what we are struggling to accomplish in other sections of the country, and you can never know what it means to those of us caught for the moment in the tragic and often dark midnight of man’s inhumanity to man, to come to a place where we see the glowing daybreak of freedom and dignity and racial justice."
****
"Just four months ago, I traveled throughout India and the Middle East and talked with many of the people and leaders of that great country and other people in the Middle East, and these are the things they talked about: That we must solve this problem if we are to stand and to maintain our prestige. And I can remember very vividly meeting people all over Europe and in the Middle East and in the Far East, and even though many of them could not speak English, they knew how to say ‘Little Rock.’

And these are the things that we must be concerned about – we must be concerned about because we love America and we are out to free not only the Negro. This is not our struggle today to free 17,000,000 Negroes. It’s bigger than that. We are seeking to free the soul of America. Segregation debilitates the white man as well as the Negro. We are to free all men, all races and all groups. This is our responsibility and this is our challenge, and we look to this great new state in our Union as the example and as the inspiration. As we move on in this realm, let us move on with the faith that this problem can be solved, and that it will be solved, believing firmly that all reality hinges on moral foundations, and we are struggling for what is right, and we are destined to win.