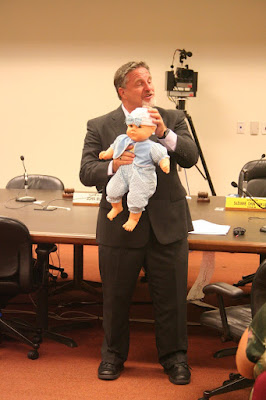 House and Senate Committees on Human Services today held an informational briefing to take a closer look at what the state can do to better address elder and child abuse.

In 2009, three major cases have made headlines in the news. One involves a former nursing aide who was charged in June with fondling three elderly women at a Kahala nursing home. Another, a man who allegedly beat his 7-month-old daughter in 2007, was recently found guilty of attempted manslaughter. The final case involves a woman charged with the murder of her 7-month-old nephew. Doctors found signs of shaken baby syndrome, including internal bleeding in the skull and semi-detached retinas.

Dr. Philip Hyden, the Medical Director for Kapiolani Child Protection Center and expert on shaken baby syndrome, or abusive head trauma, explained that major head injuries, which defines shaken baby syndrome, can only be caused by excessive force. Injuries to an infant caused by an accident, such as falling off a 2-feet couch, are usually minor. Shaken baby syndrome occurs when the brain rebounds against the skull of the baby causing bruising, swelling, pressure, and bleeding in the brain and damage to retinas.

Abuse prevention was the main focus of today's meeting. Dr. Hyden said that many shaken baby syndrome cases happen because parents or caretakers become frustrated with a crying child or lose control of their anger during a stressful day. Pediatricians must be more adamant in reminding parents of the dangers of shaking a child, he added, no matter their socio-economical status.

Advocates of elder care, including care home and foster home caregivers and case managers, also shared concerns over the lack of oversight of the people hired to care for senior citizens in nursing home institutions.

Photo: Dr. Philip Hyden talks about what can happen to a child when vigorously shaken causing a form of inflicted head trauma.
Posted by Thelma at 5:52 PM