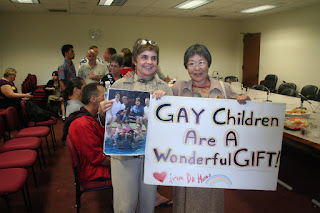 The civil union bill passed third reading today on the House floor with 33 voting yes and 17 voting no. It will now crossover to the Senate for consideration.

Here are some of the things said by house members who rose to speak in opposition or support of HB 444 (taken from live Twitter stream):

@georgettedeemer: Rep. Blake Oshiro: There will be a day when acceptance and tolerance are not just words. Let that day be today.

@georgettedeemer: On the House floor. Rep Ward: "Civil Unions is really an end-run for same-sex marriage."

@thelmadreyer: Rep. Marumoto (R) in support of civil unions: "I believe everyone should love and be loved."

@thelmadreyer: Rep. Sylvia Luke (D) in support of civil unions and speaking about discrimination:"It [the civil union bill] brings us closer to equality."

@ddepledge: Rep. Pine says supporters should not discriminate against opponents for being Christians, Mormons or Muslims.

Photo: The GLBT Caucus and the Family Equality Coalition enjoy food and talk story with House members and staff during Family Day at the Capitol.
Posted by Thelma at 4:54 PM

"This is not only about marriage or the union between two same-sex people, but rather having the option between life and death, when your at your final last seconds of life... that which your partner has the right to choose what is best for their partner. It is the opportunity to be equal in free land we call America."

"Let God be the ultimate judge!"

"How can these "church leaders", and people of God, be the first to judge or condemn others. They themselves are throwing stones! I too believe in God and the bible, but is this God's "message"? I thought he loves everyone and welcomes every walks of life? Its mind boggling to know this is how God wants us to think and how these "church leaders", make people who attend their church believers of this."

"Hawaii will benefit from this Bill. It will stimulate the tourism industry. Furthermore, more children hopefully can be adopted under this Bill, saving them and offering them a second chance to a better life."