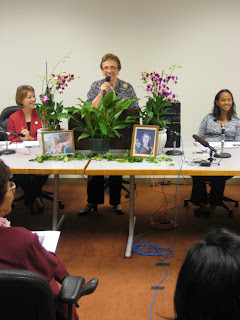 On the occasion of the dedication of the 2009 Women's Legislative Caucus Package to the late Madelyn Payne Dunham:

A big mahalo to the Hawaii State Women's Legislative Caucus for recognizing our Tutu's life and her contributions to the State of Hawaii.

I am proud that today's legislation is devoted to women's health and welfare. Our grandmother took care of all of us through difficult times, and she did so without complaint. Because of her financial and emotional support, my brother--our President-- was given access to the finest education and a broad range of educative life experiences, all of which have helped to give stronger shape and direction to his enormous talent. He has acknowledged his debt to her.

There are so many women out there who are in need of real recognition; they are doing just as much for their families and many are struggling to maneuver across the many hurdles that confront them in these difficult economic times. May these bills be supported in honor of these women's contributions to the countless keiki in need of their help. 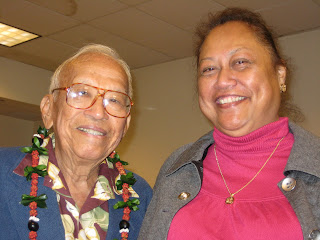 Theme: Women’s Financial Stability. As our state and our nation face an historic economic crisis, the Women’s Legislative Caucus has selected financial stability as the theme of this year’s package. The crisis may have a greater impact on women than men, as women differ from men in terms of asset ownership and earnings. In addition, many women care for children, an ailing spouse, or aging parents, and this may prevent their active participation in the work force or may force early retirement.

The Legislative Package of Bills and Resolutions:

HB327/SB779 – Relating to Cigarettes. Prohibits sale, distribution, and import of purse packs of cigarettes or cigarette packs containing fewer than 20 cigarettes per pack.

HB334/SB781 – Relating to Community Reintegration. Requires the Department of Public Safety to develop a plan to use current funding resources to improve community-based programs to assist female offenders in transitioning from prison back into the community.

HB335/SB776 – Relating to an Automated Victim Notification System. Establishes a statewide automated victim notification system to provide victims of crime with current information regarding the custody status of the offender in the victim’s case.

HB336/SB785 – Relating to DNA Collection for Arrestees of Violent Crimes. Requires DNA collection from those arrested for violent crimes.

HCR16 – Addressing “under banking”. Identifying the under banked population, encouraging local action to encourage savings and development of credit and formulation of an inventory of bank services available to low income persons.

HCR15 – Encouraging stakeholders and interested parties to work together to establish paid family leave or similar wage replacement programs to assist family caregivers. The Legislature urges the business community, the labor community, health care advocates, and the general public to work together to develop programs for assistance to family caregivers such as wage replacement and paid family leave.

Dedication to Madelyn Payne Dunham. Mrs. Dunham is not only the grandmother of newly-elected President Barack Obama, but was also a feminist pioneer in the banking industry. She worked her way up the corporate ladder to become the first female vice-president of Bank of Hawaii.

Remembering Ah Quon McElrath. “A.Q.” as she was called by colleagues and friends, was a tireless defender of the underdog. As an integral part of the International Longshore and Warehouse Union (ILWU), she helped unified workers fight for wages and working conditions. She remained active in social, political and human rights issues.

Brief History of the Caucus. The Women’s Legislative Caucus was created over twenty years ago, and is comprised of all of the female legislators in both the House and the Senate of the Hawaii State Legislature. Each year, the Caucus meets to create a package of bills relevant to women in the State of Hawaii. In addition to the bills, the Caucus is involved in supporting community organizations, such as the annual Easter Basket drive that benefits the clients of the Institute for Human Services.
Posted by James Gonser at 1:55 PM