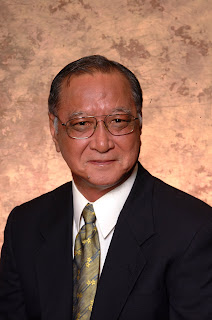 Here are excerpts and links to some of the wide news coverage of Rep. Bob Nakasone's passing on Sunday, December 7, 2008.

From The Kauai Garden Island:

Rep. Roland Sagum, a Democrat representing Kaua‘i’s 16th District, said meeting Nakasone was one of his most memorable experiences as a legislator.

“Any time of the day he was available, he’d be willing to talk to you, or answer questions,” Sagum said when reached by phone yesterday, describing his former colleague as a father figure and mentor. “He was a true role model. An awesome, awesome man. He was always looking for the best in people, and hoping for the best for people.”

From The Maui News:

"For Maui, we were very lucky to have him there," Souki said. "He always made sure Maui had its share, and, if can, a little bit more."

Nakasone's office was known as a place where lawmakers could gather to "talk story," Souki added.

"Bob would just sit at his desk and not say a thing unless he was called, but that was a mechanism for people to sit down and work out their differences," he said. "In his quiet way, he was a great mediator."

Rep. Kyle Yamashita, a Democrat representing Upcountry, said Nakasone's office was a "safe place" for young lawmakers to get feedback on their ideas. Nakasone was never judgmental, but listened carefully and talked about his past experience with the issues, Yamashita said.

"He was my mentor," he said. "He taught me a lot. I was in his office during session almost every day, just to talk and go over what was going on. Big shoes to fill."

From the Honolulu Star-Bulletin:

"What a sad day for Maui, what a sad day," said William Kennison, Maui division director for the International Longshore and Warehouse Union. "Bob was always a very, very strong supporter of Maui County, and his position in the House Finance Committee was always to get projects for Maui. We always depended on him and relied on him for support. He always came through for us."

From The Honolulu Advertiser:

Sen. Roz Baker, D-5th (W. Maui-S. Maui), said yesterday it was Nakasone's wish that his daughter, Joni McGinnis, succeed him. McGinnis worked with her father at the company he founded, Ameritone-Maui, a paint and wall-covering distributorship with two retail outlets in Kahului and Lahaina.

"I remember it was always a competition between the House and Senate. He was a no-nonsense, tough negotiator, but he was always very fair and tried to take care of projects that really needed to be done," she said.

Rep. Joe Souki, D-8th (Wailuku), said that by the time Nakasone came to the House, "he already was kind of a legend."

"Everybody loved Bob. He kept his doors open, and his office was a kind of meeting place. Members would go there, and he was always ready to give advice and listen," Souki said.
Nakasone rarely made speeches in public or on the House floor, but was passionate nonetheless about healthcare, Maui Community College, education, and long-term care insurance and other issues affecting the elderly, Souki said.

"That's the way Bob was. He was always known as someone who did his homework, and he was a walking encyclopedia of legislation. He didn't believe in going out and making speeches. He didn't do fundraisers. He stayed in his office and worked," he said.
Posted by James Gonser at 9:18 AM