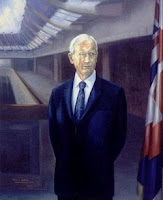 We have three new capitol ghost stories this year, so I thought I'd space them out and do one Monday, Wednesday, Friday. Here's the first from an anonymous reader (with my edits.) It refers to the legend that the spirit of former governor John A. Burns remains at the State Capitol, and that you know he is around by the smell of his cigar.

"I worked as an Administrative Assistant in the reception area of the Lt. Governor's office from 2003 to 2007.
Several times during my time there I noticed the smell of cigar smoke in the Lt. Governor's front office. It wasn't strong or bothersome but you could definitely smell it.
We would also feel something playing with our hair when we smelled the smoke. Nothing bad, just tickling, like there was someone behind you brushing a feather over the top of your head. I would try to brush it away but it would continue. Nothing spooky, just weird."
Posted by James Gonser at 11:14 AM