A Bitter Pill: The High Cost of Prescription Drugs 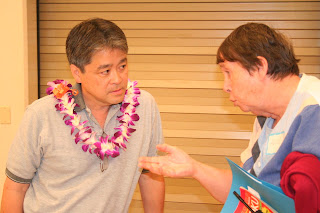 I-SaveRx is a prescription drug reimportation program whereby a reputable pharmacy benefit manager works with member states to enable its residents to access discounted drugs through the internet and a toll-free number. Illinois started the program four years ago and now saves its residents over $100 million a year.

(Photo: Rep. Roy Takumi and resident at a "Lawmaker's Listen" earlier this year.)

With the legislature overriding the governor’s veto, Hawaii will be the sixth state to participate in the I-SaveRx program. There are safeguards in the law that allows us to cancel the contract at anytime, with or without cause, as well as immunity from any liability for injury or damage caused by the prescription drugs obtained through the I-SaveRx program.

According to the World Health Organization, residents of the United States spend more money annually on health care then residents of any other country in the world, and yet have a shorter life expectancy and higher infant mortality rate than numerous countries including Canada, United Kingdom, France, and Germany. A contributing factor is the ever increasing cost of prescription drugs that has forced over six million Americans, many of them elderly citizens on fixed incomes, to buy their medications from outside the U.S.

And there’s no relief in sight. According to AARP’s Public Policy Institute, in 2006 the cost of the top 193 brand-name drugs rose twice as much as the rate of inflation. Another study done by the General Accountability Office found that the average prices for the top 44 brand name drugs increased 48.6 percent from 2000-07, a period when the Consumer Price Index increased only 19.9 percent.

What kind of savings are we talking about? Let me give two examples. Lipitor is an anti-statin drug for those who have high cholesterol and is taken by over 26 million Americans. A 90-day supply from Long's will set you back $393.85. Under I-SaveRx, the cost would be $234.14, saving almost $150. Or take Nexium, the well-known proton pump inhibitor used to treat acid reflux or heartburn. Go to Long's and be prepared to pay $499.30 for a 90-day supply whereas I-SaveRx will cost you $211.70 or 57 percent less.

Why shouldn't the residents of Hawaii have the ability to access prescription drugs at a lower cost that will improve their quality of life?

The I-SaveRx program is a modest attempt to do just that.
Posted by James Gonser at 9:04 AM