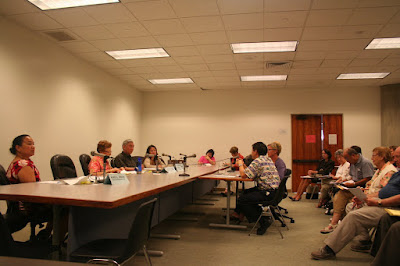 During the first special session this year, the House and Senate chambers overrode a line item veto by Governor Linda Lingle which removed an appropriation of $500,000 to the Kupuna Care Program. County representatives from the Kupuna Care Programs reported to the Joint Legislative Committee on Aging in Place (JLCAIP) today on the impacts on the program and its clients and employees if these funds are not released. Committee chairs are Rep. Marilyn Lee and Sen. Les Ihara.

It was clear at the beginning of the meeting that all counties will suffer if they do not receive additional funding for their kupuna care services, including case management, home delivered meals, transportation, personal care, chore, homemaker, attendant care and adult day care services. How many will be affected statewide has yet to be determined.

Honolulu, with the largest population of elderly citizens, would probably be hit worst. According to a report from its Elderly Affairs Division, if the funds are not released, 341 fewer clients will be served and 82,231 fewer hours of service will be provided to the elderly on Oahu. In addition, the programs will not be able to address the growing wait list problem. On Oahu, of the 320 people named on the wait list, 210 of them are there specifically because of insufficient funds.

The Executive Office on Aging will compile all County reports into one cohesive account of the consequences and effects on Kupuna Care Programs without additional funding.

In other committee updates, take a look at my notes below:

Respite Inventory Project - Grandparents raising grandchildren will be able to use respite care services. The UH College of Tropical Agriculture and Human Resources (CTAHR) and the UH Department of Family and Consumer Sciences are gathering a list of respite services by cost, waitlist number and criteria for new clients, among others. The combined product will be completed in October and reported to JLCAIP. It is possible that a handbook will be made from these lists of respite service in Hawaii for distribution to the public.

Cash and Counseling Project - The demonstration phase of the projects will cost $835,000 the first year in Phase 2 and $1.35 million the second year in Phase 3. The Executive Office on Aging does not know where the money to fund Phase 2 and 3 will come from.

Family Leave Work Group and Grandparents Raising Grandchildren Task Force - Both are on its way to being established and it was confirmed that both groups are subject to the Sunshine Law.

Aging and Disability Resource Center - The site of ADRC in Hilo will be completed soon and its website will be open to surfers by the end of year.

The Joint Legislative Committee on Aging in Place today met to discuss the current projects that have stemmed from Act 220 (SB2830) and Act 243 (HB2520), laws that provide for a public policy program that supports family caregivers and kupuna.

There is this new television series called The Generations Project. This coming Monday they are showing an episode about a Hawaiian woman who learns more about her great grandmother who contracted leprosy. Its a really amazing story that was filmed all over Hawaii. I just thought you might be interested.

You can watch in online http://www.byu.tv/ or on BYU Television
It airs on Monday nights at 8pm Mtn Time.