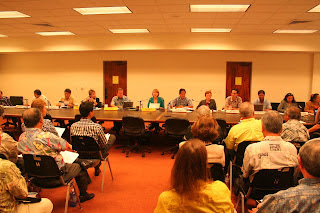 The Hawaii Health Systems Corporation (HHSC) checked into the fiscal ER today. The House Finance Committee and the Senate Ways and Means Committee held their joint informational briefing on the HHSC, a network of public hospitals in Hawaii, which faces a projected shortfall of $62 million by the end of fiscal year 2009.

"The Health System used to be run by the Hippocratic Oath; now it's 'show me the money'," said Rick Vidgen, the HHSC West Hawaii board member.
How did they get to this point? HHSC cited five primary reasons why they are losing money:
1. HHSC has no Disproportionate Share Hospital status - thus losing approximately $33 million per year. Hawaii is only one of two states with no DSH.
2. Under-reimbursement resulting in a loss of $90 million per year.
3. Wait list problem, losing approximately $30-$50 million per year.
4. Physician Call Coverage and Recruitment Cost - Over $15 million per year.
5. Cost of operating as a state agency - Includes $50 million in fringe benefits, salaried vs. hourly employees; paid time off.
The administation says they are unable to intervene with the management and operations of HHSC, citing HRS 343F-11, the Executive branch; noninterference clause.

Finance Chair, Rep. Marcus Oshiro, asked Linda Smith, the Governor's policy advisor, if the administration has received a ruling from the Attorney General on what they can and cannot do to assist HHSC under this part of the statute. Smith said that the A.G. was the one who pointed out the section to them, but they have not received an official ruling. Rep. Oshiro said he would ask the A.G. for a ruling and would waive his attorney/client privilege in order to make the information public.
Chip Uwaine from the United Public Workers indicated that there would be an announcement on Monday on 54 layoffs, but was unsure what positions they were, or at what hospitals.
Senator Roz Baker, Ways and Means Chair, solicited agreement that monetary relief was needed for this fiscal year, and that the Legislature would not be able to make an emergency appropriation unless the Governor called the Legislature back into special session for this purpose.
Posted by James Gonser at 2:46 PM

Email ThisBlogThis!Share to TwitterShare to FacebookShare to Pinterest
topics: HHSC