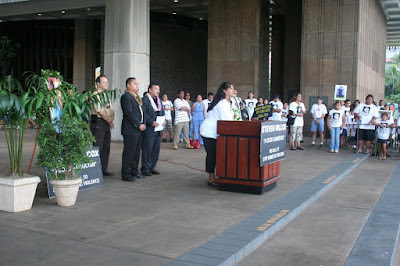 More than a hundred people gathered at the State Capitol today to honor the memory of Steven Wilcox, the teenager who was killed last week while trying to intervene in a domestic violence situation.

Rep. John Mizuno and Wilcox's family members hosted silent march around the Capitol last night in hopes of building awareness on improving domestic violence laws. Although Wilcox did not die because of his own domestic violence situation, he was the Good Samaritan who tried to stop the assault of another person.

Lawmakers and staff members have held several silent marches this year following the tragic deaths of Janel Tupuola, Cyrus Belt, Della Dikito and Tyran Vesperas-Saniatan. Tonight's silent march was especially personal to one capitol staff member who is a relative of the late Steven Wilcox. Alika Malabey, the office manager for Rep. Josh Green and Wilcox's, has participated in several silent marches, but never to this capacity. 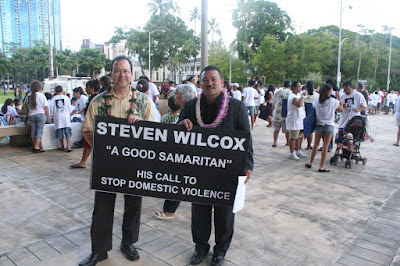 was a family member who was struck down while defending another person," said Malabey.

Following the silent march, family and friends sang "Amazing Grace" and "Hoonani Ka Makua Mau" while holding hands in a circle.
Photo (top): Gwen Kai'lihiwa, Steven Wilcox's mother tells the participants of the silent march that "it might be my loss, but heaven's gain and god's glory." She thanked everyone for attending and urged them to not let her son's death go in vain, but to get involved and help stop domestic violence. Behind her from left to right, Rep. Tom Brower, Alika Malabey and Rep. John Mizuno.
Photo (bottom): Reps. Tom Brower and John Mizuno at the silent march for Steven Wilcox.
Posted by Thelma at 5:18 PM