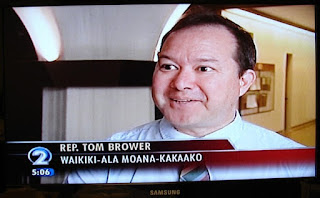 Are you a hardcore Jack Johnson fan? Well, don't expect to be seeing him at the Kokua Festival this year unless you're willing to shell out more than $100 and as much as $5,000. Like last years football games, scalpers have already bought out all the tickets before fans could get to the $40 to $125 tickets.

Rep. Tom Brower was interviewed on KHON2 yesterday about a bill he introduced this session that would make ticket scalping a misdemeanor. Unfortunately, HB2918 did not make it through the legislative process this year, but may be reconsidered next year.