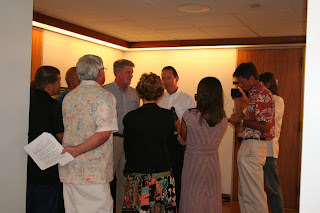 Environmentalists opposed to the Superferry's launch prior to completion on the environmental review were at the Capitol today. Led by Isaac Hall, attorney for Maui Tomorrow, Inc., the group claimed that it would be "irresponsible of us to leave the protection of the environment to the same administration that has been dedicated to minimizing concerns about the Superferry project." Nearly two weeks ago, the legislature did ask environmental groups to submit recommendations for conditions of operation that could be incorporated into proposed legislation. The Sierra Club and others declined on principle because they believe the legislature should not convene a special session to benefit the Superferry. Now that the special session will likely start next Wednesday, Hall said that "We are forced to recommend conditions, not because we agree that the Superferry can operate (we do not), but because it is now necessary to protect Hawaii from the impacts of the improvident actions of the Lingle administration and the Legislature if they were to allow the Hawaii Superferry to operate, even after a month long trial amply demonstrated that this would be unlawful and would cause irreparable harm in multiple fashions."

Also, the Speaker and Senate President met with Attorney General Mark Bennett on the current draft. The House is scheduled to caucus tomorrow, Friday, at noon.
Posted by James Gonser at 6:08 PM

Email ThisBlogThis!Share to TwitterShare to FacebookShare to Pinterest
topics: Superferry