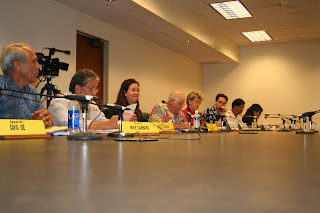 The joint Senate-House Investigative Committee on the management and operations of the Bureau of Conveyances held its first hearing today. The committee adopted rules to govern the proceedings of the committee, approved the hiring of investigator Hilton Lui, approved to issue a subpoena of a representative of the Hawaii State Ethics Commission to report on the findings of their investigation of the BOC, and approved a list of future subpoenas, primarily of BOC and Department of Land and Natural Resources personnel. (Photo from left to right: Senators Mike Gabbard, Russell Kokuban, Co-Chair Jill Tokuda, Co-Chair Joseph Souki, Representatives Cynthia Thielen, Karl Rhoads, James Kunane Tokioka and Sharon Har.)

Email ThisBlogThis!Share to TwitterShare to FacebookShare to Pinterest
topics: Bureau of Conveyances